Should Native People Have Rights To Ancient Giant Finds? 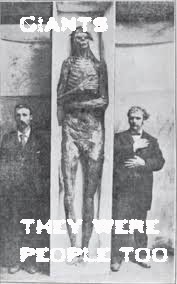 In the case of ancient giants, they would be considered "native" and "native" comes under the Repatriotism Act that allows the Native People of America to claim ancient finds that were pre-columbian.

This is a very vague and gray area. This means, ancient giants would be handed to tribes they have no blood relation or cultural relation to, to rebury.  Imagine if a Muslim was given the remains of a Jew in Israel. They may share the same land, but that does not mean that their ethnicity or religious backgrounds are compatible.

In 1990, the federal government passed the NAGPRA Act that called for repatriotism of ancient artifacts in America as belonging to the Natives. From the prolific book "The Ancient Giants That Ruled America" by Richard Dewhurst, the bog people of Florida were discovered by DNA to be Haplogroup X which is of Northern European descent. Yet, the remains were handed over to local Natives to put to rest.

Spirit Cave in Nevada produced another interesting find, that the mummies were radiocarbon dated as being from 9400 years ago. The Bureau of Land Management (another interloper along with Smithsonian often cited) stepped in and claimed the remains belonged to the Paiute-Shoshone Tribe. With some hagling back and forth, the remains were allowed to be DNA tested. They were found to be of Nordic or Ainu decent.

Do you believe that unusually proportioned finds should be DNA tested to determine who has the rights to them?