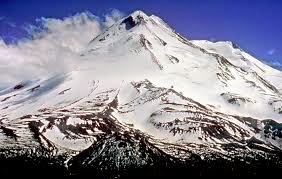 Is there something to be said about weirdness and volcanic mountains? Look at Mt. Fiji's "Suicide Forest" and Sakurajima in Japan is known to have weird lights and plasma balls, but perhaps the most famous of the "weird" magnets is Mt. Shasta in California.

The mountain is linked to all these oddities:

Hollow Earth and the Lemurians
There is a legend that a continent exists underneath Mt. Shasta called Lemuria. This legend was begun by Natives who explained tectonic activity by supernatural means. The legend goes that Lemuria had sunk and the people had fled to the hollow earth below Mt. Shasta.

Here is an article with some interesting insights:

...These Lemurians supposedly live deep inside the mountain in apartments plated with gold. In this secret colony, they preserve their ancient customs.


Lemurians are commonly described as graceful and tall -- seven feet and up -- with long, flowing hair. They dress in white robes and sandals. They are said to have long, slender necks which they adorn with beautiful decorative collars made of beads or precious stones.

Perhaps their most unusual physical characteristic is a walnut-sized organ that protrudes from the center of their foreheads. This sixth-sense enables Lemurians to communicate among themselves by extra-sensory perception.


A Dr. M. Doreal claimed years ago that he visited the Lemurians inside their mountain. “The space we came into was about two miles in height and about 20 miles long and 15 miles wide,” he wrote. “It was as light as a bright summer day because suspended almost in the center of that great cavern of space was a giant glowing mass of light.”


Another man reported that he fell asleep on Mt. Shasta, to be awakened by a Lemurian who led him inside the mountain to his “cave, which was paved with gold.” The Lemurian told the man that there were a series of tunnels left by volcanoes that were under the earth like freeways -- a world within a world.


Lemurians supposedly mastered atomic energy, extra-sensory perception, electronics and science as long as 18,000 years ago. Back then, they knew how to propel boats using energy radiated from rocks. They had airships and flew them to Atlantis and other places.

Today, people report seeing strange lights on the mountain. One explanation is that they are spacecraft coming and going from a fortress deep in the mountain.


Lemurians, it is said, possess supernatural powers that enable them to disappear at will -- one reason why they aren’t spotted very often. Their power also allows them to “will” an intruder away.


Bigfoot
Bigfoot is often reported on the Mt. Shasta area for quite some time.

(From Bigfoot Encounters)
(1976 Mt. Shasta Herald) A huge, strange, bad-smelling creature that frightened a logger just south of Cascade Gulch on the lower slopes of Mt. Shasta Friday morning still has not been identified.

Virgil Larson, 47, from Salmon, ID gave sheriff¹s sergeant Walt Bullington the best description he could after seeing the ³non-human² creature near a helicopter logging operation about 8:30 a.m. Larson and his partner Pat Conway, had hiked down the steep slope to work, from their pickup they had left on top of the hill.

They were taking a break and had separated. They could not see each other, but they were still within hearing distance. After two or three minutes, Larson said he heard someone else coming down the hill.

He was expecting someone from the US Forest Service, looked up and saw what he thought was the Forest Service man walking down the area about 15 yards east of the rough path the loggers had made.

Larson shouted to what he thought was the man, which stopped, turned its head toward Larson, but did not speak and started walking again. It went about five yards further down the hill, then came back behind a bush as if it were putting the bush between it and Larson.

Larson shouted the second time, then whatever it was put its head over the bushes. Larson said he had a view of the creature from the bust up, that was when he realized it was not a man not even human.

Larson told Bullington he could not remember the exact features, but he thought the hair started at its eyebrows and went straight back over its head. He did not know th length.

It was black, not combed, dirty, but not unduly so, he said. He could not remember what its eyes looked like or whether or not it was wearing clothing.

It just scared the hell out of him, he told Bullington. It was about 20 yards away, Larson said, and stunk like a half rotten bear hide. Larson took off.

When he and his partner came back some 30 minutes later, they could still smell it. They fashioned clubs from limbs for self protection, then went for the log landing. They contacted the sheriff¹s office and the Forest Service office through CB radio. Larson later had his partner get behind the same bush and hold his hard hat up on a stick, and then estimated what he had seen was about 7 to 7-1/2 feet tall.

Vortex
The mountain is often reported to be an energy vortex, much like other areas around the world including Sedona, Arizona.

Sacred Place/Leylines/supernatural
Here's an interesting insight -  A long history of mythology surrounds the mountain, including legends of Lemurians, Atlanteans, Secret Commonwealth citizens, dwarfs, fairies, Bigfoot, and space beings who materialize at will. The Indians believed Mt. Shasta was a portal to other dimensions. Bigfoot of course is associated with UFOs and is considered an interdimensional being, that can walk into this reality and his own dimensional reality at will. Mt. Shasta is a very special place to say the least; it represents much more than just a mere mountain. Mt. Shasta can be considered as one of the most sacred places on this planet. The mountain is a mystic power source for this planet. Some people theorize that it is connected to a leyline, similar to Stonehenge in England. It is a focus for angels, spirit-guides, spaceships, masters from the Light Realm, Wicca and the home of the survivors of Ancient Lemuria, which sank under the waves of the Pacific Ocean a little over 12,000 years ago.


What is it about Mount Shasta that makes it so legendary? A combination perhaps of Native American legends, locals that feel its powerful volcanic splendor staring them down every day, and its natural beauty and power.