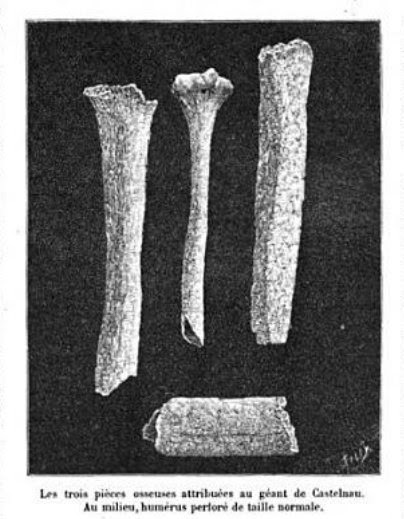 In the Castlenau-le-Lez Cemetery in France in 1890, a skeleton was dug up that made everyone scratch their heads in wonder. It would appear to have been the tallest man ever recorded - 11-feet 6-inches.  The body was believed to have been from the Neolithic Era (between 10,500 BC and 4500 to 2000 BC). He was estimated to be from around 9500 BC.

From Wikipedia, "It is of some interest that in 1894, press accounts mentioned a further discovery of bones of human giants unearthed at a prehistoric cemetery at Montpellier, France (5 km Southwest of Castelnau) while workers were excavating a water works reservoir. Skulls "28, 31, and 32 inches in circumference" were reported alongside other bones of gigantic proportions which indicated they belonged to a race of men "between 10 and 15 feet in height." The bones were reportedly sent to the Paris Academy for further study." 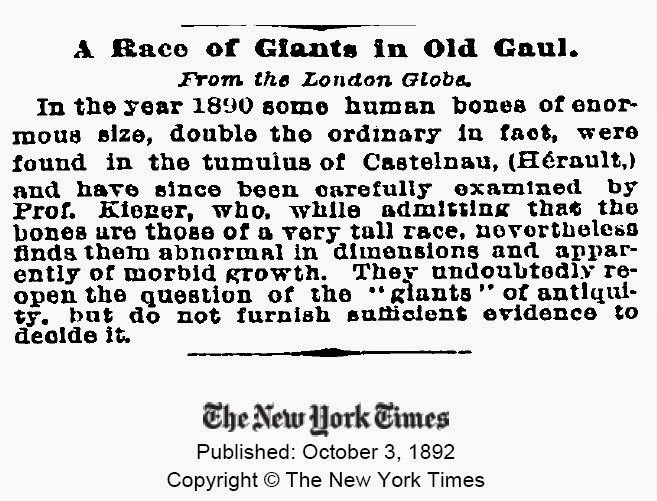 In a repeated theme we keep hearing about - the bones, along with the bones of more giants in that area, went to the Paris Academy to only go missing over time. Hmmmm

Still, the Castelnau Giant is recorded as the tallest man documented. Some secrets are hard to hide.

Why do you suppose it is that authorities keep "losing" bones?

It appears to not just be an issue with the US government and the Smithsonian. It would appear that Victoria Era sensitivities made finding skeletons that didn't fit into either evolutionary or religious explanation, a serious threat.

Would the same thing happen now if a giant skeleton were found? At this point, it almost has to go missing. You can't just suddenly recognize something you've been playing a shell game with for over 100 years.

I still say that the Smithsonian could seriously make a killing and earn respect again if they came clean and said, "we were preparing a whole new building of the ancients to display all these finds and reveal a history we've put together that took a lot of time and DNA studies to put together properly." If they did that, I would actually attend the museums again, but for now, I am boycotting them and anything having to do with them.  They will have to bring these finds out of storage and document them for me to ever consider supporting them. They are not true archivists or educators. They are puppets to show the information we are deemed allowed to have once it's been polished and posed.