Are Attics and Basements More Haunted? 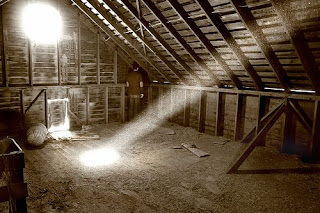 If you watch ghost hunting shows, you probably already wonder this; are attics and basements more haunted than other parts of the house?

While the most reportedly haunted part of a home is a bedroom, it’s hard to discern whether that is sleep-related or not. If someone viewed something while prone on his bed about to go to sleep, about to wake up, or during the night, I’m likely to dismiss it. It could be an entirely legitimate encounter, but the state of the human mind going in and out of sleep makes it just too unreliable as a witness, sort of like being drug/alcohol impaired.

Living rooms/family rooms report a good deal of activity, most often from the corner of the eye. This is where folks see a shadow form or glimpse something while turning their heads. This can often be because these rooms are used primarily for television viewing and are not usually well lit; the light from the TV can cast light and dark on the edges of the room and make it seem as if something is moving in there.

Hallways are remarkably active, as are stairwells. How many times on “Ghost Hunters” show does TAPS go to a location and hear about someone walking the stairs and the hall? All-the-time! I have a few theories about this. One theory goes like this: Energy runs along pathways of easiest resistance, sort of like a Feng Shui principle for Chi's (energy) movement. Another theory is that the most traveled areas over time (and the least likely to have carpeting) hold residual sounds of footsteps in hallways and stairs.

What makes attics and basements so haunted? Well, once again we’re talking about theories. This time, however, I’d like to hear which theory sits best with you:

FENG SHUI:  If there is any "negative" energy in your home, it can be trapped by cul-du-sacs like attics and basements that have a trapping effect. This kind of energy is believed to be "bad spirits." Check out the most excellent book "Confessions of a Feng Shui Ghostbuster" by Anna Maria Prezio.

EMF: Exposed wiring and electrical breakers could send off high EMF in these areas and make people uncomfortable if they are sensitive.

ABANDONED: People don’t like these uninhabited parts of the home. Have you ever walked into an abandoned building? Creepy, huh? That’s how attics and basements feel. They’re unattended and you can smell and feel it about them, that no humans have been there recently. Sounds are also unfamiliar in such places since no one spends time there. In other words, they have no baseline understanding of the place's usual lighting and sounds to compare.

MECHANICS: Basements and attics are often not well lit and not finished or decorated. Our basement when I was a kid was a concrete bunker with thick stone walls and a big gaping open crawlspace of earth and darkness filled with snakes that greeted you. Not such a happy place, huh? Attics are stuffy, hot, and you have to walk carefully on unfinished flooring and duck your head to keep from getting whacked. Spiders hide in corners, darkness spreads over the places where the bare light bulb doesn’t illuminate… You get the picture. Remember my recent post about the power of suggestion? It just looks like it has to be haunted.

GASES: Basements and attics are often storage areas for things that can give off gases and make you feel generally unwell.

HIDING SPOTS FOR GHOSTS: TAPS says that such places are ideal for entities to hide from the living, a kind of retreat to their own bedroom with a “do not disturb” sign on the door.

So, what do you think might be the reason for so many haunted basements and attics?