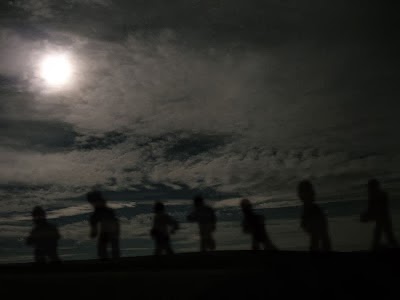 In the puzzle that is figuring out ancient giants, where they came from, who they were, why they had advanced technology for their time, why the Smithsonian and government wish to hide their evidence, there is another part of the mystery that haunts me - why were the Eastern and Western giants so different?

What we know of the giants is what they left behind. In the east, we find burial mound and evidence of their tools and villages. But, in the west, we find the giants mostly in caves from California's Death Valley and Arizona's Grand Canyon to Nevada's Lovelock Cave. Why? Why did they seem almost primitive with no communities or burial mounds, and yet evidence of intricate basketmaking, fishng tools and language found in the caves? In the time period when they were in the west, large lakes and lush plant life abounded. Why not have communities out in the open? Why use caves?

Perhaps they were't primitive. Perhaps we have clues in old legends. The Lenni Lenape tribe traveled east from the west escaping what the tribe said was a volcano explosion about 5000 years ago. The Hopi speak of an ancient fiery occurrence that had the "ant people" going underground. The Grand Canyon find was described as having seed catalogs and all the items for their civilization stored in the caves as if it were a giant archive, as well as lots of art work and sculptures - showing they were no primitive.

"The first people of Tokpela, the First World, were safely sheltered underground as fire rained down upon the earth. Volcanoes and fires storms destroyed all that was above them until the earth, the waters, and the air itself was elemental fire." (Hopi legend of the ant people).

(Lenni-Lenape legend) The Mississippi River Valley was lush and fertile, and was looked upon by the Lenni-Lenape as a good place to establish a permanent settlement. They followed it downstream to its junction with the Missouri River where they came face to face with the mighty *Talega; The Moundbuilders. Highly sophisticated and intellectual, the center of Talega land was the walled city of Cahokia located near our present East St. Louis. Cahokia was the commercial, political and religious center of the Moundbuilder culture, and has been described as "a cross between New York, Washington, D.C. and the Vatican".

A message was sent to the Talega leader asking permission for the Lenni-Lenape to settle in their area as friends and allies. Permission for a settlement was denied, but safe passage across their territory was granted. A peaceful crossing was begun, but trouble soon reared its head. Over the generations, the numbers of the Lenni-Lenape had swelled greatly. When the Talega leader saw the thousands of people preparing to cross his land, he panicked. Fearing an invasion, the Talega warriors were ordered to attack, killing those who had already crossed the river. Enraged by this deception, the Lenni-Lenape swore to "Conquer or die", and called upon the Iroquois (with whom they had established a strong bond) for help. Help was granted.

What followed has been described as one of the largest wars ever fought on the ancient continent. One stronghold, called Fort Ancient, had pallisaded walls 13 feet high and 5 miles long, and could shelter 10,000 people. The war raged over the lifetimes of 4 Lenni-Lenape chiefs before they were finally victorious, driving the Talegas south forever. The Natchez are the descendents of the final remnants of the defeated Talega.

(*Talega tribe have been referred to as giants)

Death Valley giants were described as being decked out with all their worldly belongings and even their seeds and samples of the animals from above ground. Whether the legend of this supposed series of miles of tunnels filled with ancient giants is true or not, it is immensely intriguing because it, once again, verifies tales of giants in caverns underground and ancient people speaking of fiery volcanic eruptions.

So, what is different than the western and eastern US giants? Well, if my non-scientific hypothesis is correct, it would seem to be - natural disaster. And, this would also mean that somewhere in the ground, there must also be the remains of the civilizations they had above ground before they had to go below, but were perhaps destroyed in layers of ash and time, water receding, and other changes in thousands of years.

What happened to these people? Well, it would seem that a lengthy period of time in the underground and unable to find supplies for the long-haul, they likely passed away, one by one, placed in a resting place within the cave as the others dwindled down which might explain why the explorers in Death Valley reported warriors at guard at a counsel table.

I'm on a voyage to figure out what eruption might have created this situation and hope to come to a real date that would help us understand when the ones in the west went underground and to understand the time frame they were living here. Of course, as always, I will keep you apprised.