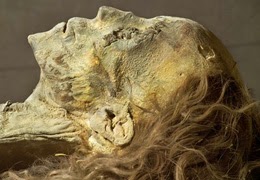 Possible explanation:  Northern Europeans evolved to take in more sunlight with pale skin so they could assimilate vitamin D. Vitamin D is critical for bone and tooth growth and in a climate that had little sunlight, they adapted. Perhaps in these latter stages of evolution, 10,000 to 20,000 years ago, when the Nordics arrived in parts of the world that were sunnier, they grew massive bone structures and the perfect teeth reported at the sites of ancient giants were a part of that process of vitamin D assimilation in a land with plenty of sunlight.

Possible explanation:  Perhaps ancient giants were evolved Neanderthals. They evolved their skulls and brains differently than homo sapiens and those changes created a different endocrine and pituitary system that regulated hormones of growth.

Possible explanation:  Denisovans and Neanderthal had the dominant genes like lions do, so when mating with homo sapiens they created larger than usual beings, like male lions do when they mate with female tigers and create ligers. These offspring had dominant tall genes.

There are only some of my hypotheses to explain the unusual height of these ancient tribes. I am willing, upon occasion, to talk about extraordinary explanations, but if we want to work with the confines of the scientific world and evolution, these are very real explanations for how this race of giants existed and how they grew to such strange heights, knowledge, and skull shapes.

Email ThisBlogThis!Share to TwitterShare to FacebookShare to Pinterest
Labels: THEORIES