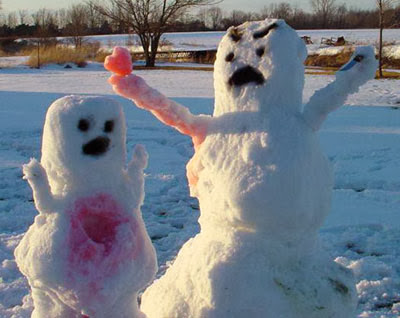 You don't think of Christmas as eliciting terror (other than unwelcome drunken family members and bad sweaters for gifts). But, some folks who didn't like the way Christmas horned in on Halloween in the store displays, might have gotten the ultimate revenge -

Storm of the Century: "Give me what I want, and I'll go away." This was voiced by a strange visitor who came in with a winter storm to a small village and held the occupants hostage in fear, as he seemed to know too much about them and wanted one thing before he was willing to spare them from his wrath.
The Shining:  A hard-up author takes a miserable job caretaking a remote mountain resort during the snowed-in winter months. He bring his wife and child to hunker down and hopefully knock out a novel, but it would seem the resort is making the man act threateningly different and there is nowhere to escape.
Frostbitten:  Scandinavian horror (one of my favorite genres). A town in Northern Sweden is terrorized by vampires.
Dead Snow:  Scandinavian. Perhaps one of the best over-the-top zombie gang attack movie scenes ever. Nazi zombies in Norway? Oh yes!
Let the Right One In:  Scandinavian. Seriously, the Norse people understand horror like Seattle understands depression. The forbidding climate creates some very dramatic and bleak terror. Norwegian vampire story involving a young female vampire and her human neighbor.
30 Days of Night:  Fantastic and chilling (figuratively and literally) rendition of vampires as they truly are; soulless feeding opportunists. A small village in Alaska shuts down during the 30 days of darkness in the winter, but it appears to be "snowbird" time for vampires to enjoy feeding in nonstop night.
Dead of Winter:  An aspiring actress is lured to a remote mansion or a movie tryout that becomes a captive situation.
Dreamcatcher:  Campers discover the town is being invaded by some kind of aliens.
The Thing:  At an arctic station, researchers come across crashed from another planet and it will kill them one by one with nowhere to escape to.
Wendigo:  A family escaping to a small town, hit a deer with their car. After that, dark things happen and they begin to wonder just what that deer really was.
Cold Prey:  Scandinavian. Skiers take refuge in an abandoned hotel only to find there is something evil there.
Snowbeast:  1970s Bigfoot movie about a mountain ski resort and its killer occupant in the forests that might ruin their big season.
Frozen:  Scandinavian. Skiers stuck on a ski lift have to make some life and death decisions.
Troll Hunter:  Scandinavian. A team of college film students follow a rugged outdoorsman who appears to be hired by the country to hunt real-life trolls.

Black Christmas: (1974) It's Christmas break and some girls are staying at the sorority house.  They're terrorized by evil phone calls and a killer finishing them off one by one.
Silent Night Bloody Night:  (1972) A man inherits a home with a dark history, so he begins to investigate it.
Santa's Slay:  Apparently, Santa lost a bet with an angel and was forced to give children toys, but when the bet is off, he becomes evil again.
Santa Claws:  A deranged fan wants to possess a b-movie actress.
Gremlins:  A boy is given an exotic pet, but doesn't follow its care and feeding directions and chaos ensues as it begins to multiply evil creatures that take over the town.
Jack Frost:  A serial killer comes back as an evil snowman.
Don't Open Till Christmas:  Scotland Yard is on the alert to someone killing Santas.
Christmas Evil:  A crazed Santa decides he'll punish the bad ones.