Are You a Paranormal Geek? 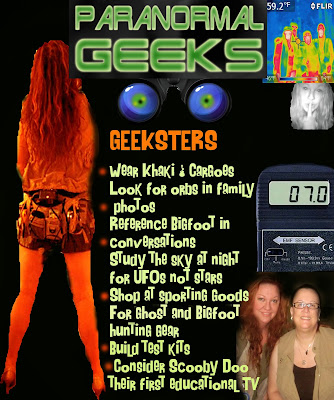 It might be easy with a term like "Paranormal Geek" to imagine folks with meters chasing ghosts, but paranormal geeks are truly a wide swath of the population and, as Julie Ferguson and I like to say in our book slogan for "Paranormal Geeks" we outnumber the normal people.

A paranormal geek could be any of these and variations:

A lover of Victorian and steampunk era and style, seances and Ouija boards. Might like Jules Verne, HG Wells, HP Lovecraft, Shirley Jackson.

A SciFi freak who theorizes on a future where computers can master our world, man can encounter other life forms and that earth was colonized by aliens. Might like Rod Serling, Nikola Tesla, Ridley Scott, Philip Dick, Ray Bradbury.

A history buff who finds the background of sites is romantic and interesting, unsolved mysteries, artifacts, preservation and genealogy might all be part of their lives. May like Abraham Lincoln, George Washington, Sir Winston Churchill, Louis Leakey, Matthew Brady.

A new age seeker who believes in psychic skills, auras, and the power of crystals.  Perhaps a spiritual person who is into astral projection, remote viewing, leylines and more. Might liked Edgar Cayce, Lorraine Warren, Nostradamus, Whitley Strieber, Edward Leekskalnin.

A zombie fan who can't get enough of "The Walking Dead," zombie walks, and events. Might like Max Brooks, George Romero, Woody Harrelson.

A guy at home who watches documentaries that come about unexplained phenomena, read books on it, finds it a fascinating subject.  Might like Monsterquest, In Search Of, UFO Hunters, David Hatcher Childress, Nick Redfern.

As you can see by just this sampling above that paranormal geeks are a wide swath of the population. With so many believing in ghosts, UFOs, aliens, and Bigfoot, psychic powers and more - it would seem that together we make a group of people who vary from spiritual to scientific, adventurous to historians. 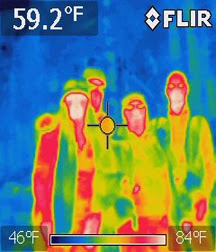