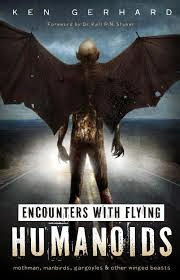 I loved the movie "Jeepers Creepers," rushed to Point Pleasant to Mothman territory on my vacation - 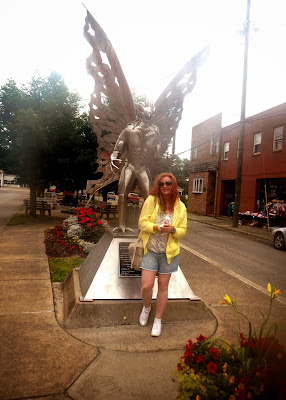 I live in the desert southwest and have seen lots of things in the air that defy any explanation I could give them, but when my co-author, Julie, and I ride out to abandoned mining towns and such, in the back of our mind as we run into "swarms" of vultures, is the concept of a thunderbird or a Creeper. Nothing can give you more chills than something that could fly after you.

I was thrilled that Ken Gerhard, a respected crypto research, decided to write a book about encounters with flying humanoids. They are not just a modern day issue and not just the Mothman and Jersey Devil.

The book overall is a great compendium of recorded flying humanoid sightings of all kinds, over all periods of time and locations. It is a great reference book for those who want to keep a flying cryptid book on their shelf.

I can't begin to explain how many flying humanoids were captured in this book, but I learned about ones I never heard a hint about, obscure ones, ones that were kept more secret by locals, and historic ones never spoken of again.

Mexico is covered extensively, as well, where many of the flying humanoids hit the news from being filmed. Gerhard also takes us to other countries and more recent sightings.

I was pleased that in the end of the book, Gerhard tied it together by discussing what may be the explanation for these oddities in the sky. After taking us through such a wide variety of stories over time and location and description, it was good to hear him bring us back down to earth for a moment. Although we have no absolute explanation for each occurrence, we can start listing the possibilities and going down the systematically.

I recommend this book for anyone who is curious about the unexplained flying beings reported in the sky. It's part of my reference library now and really, admittedly, has me watching the sky more than usual. After all, the desert has 180 degrees of it and clear skies almost every day.

Note: I will be reviewing lots of researcher's books this month and one thing I do not like to affiliate with in any way in the Bigfoot field of research is anyone who is pro-kill and has no qualms about shooting a Bigfoot. That being said, when I review books, it is based purely on the content of the book and not the character of the person who wrote it. I cannot keep tabs on everyone in the industry and their stand on Bigfootery, as I am in my own research and not other-oriented. So, if it comes to light that any author I have given favorable review of has unfavorable character, that was not my intention to support them, simply to support the worth of their book. This disclaimer will be after ever review and is important to me because I work hard to dissociate from such types but cannot always know what is in the hearts of other researchers.