Review: "The Big Thicket: On the Trail of the Wild Man" by Rob Riggs 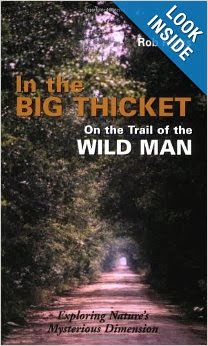 I just finished reading "The Big Thicket: On the Trail of the Wild Man" by Rob Riggs.

I picked it up because I am focusing my research on East Texas Bigfoot, but when I heard this book mentioned the unexplained lights too, I just had to get it! This is something I keep running into repeatedly.

This was an exceedingly well researched and impeccably well written book and Riggs has a sharp mind and a great internal dialogue. Some authors dismiss pretension to they can give a real voice to their writing and I feel like I sharing his thought process unedited. It makes for a compelling read. He starts you out on the milder mysteries of Texas and before you know it, he's leading you down some paths that I personally believe are stitched together and he does a brilliant job of pointing out just how.

In a great example, he quotes Jacques Bergier from his book "Secret Doors of the Earth,"
"points of contact" where Bergier postulates, "places likely to contain a secret door" and these places "share certain characteristics; gravity is disturbed, terrestrial magnetism is disrupted, visions occur to visitors at the site, and enigmatic disappearances take place."

These odd lights in Texas and other locations, the strange things are witnessed, the Big Man - all seem to point to some set of circumstances that are highly unusual. I admit that my obsessions with Bigfoot are many, but the one that haunts me the most is how he can co-exist with us and yet not -

And ultimately, after giving us great interviews with witnesses, scientific findings, discussions by great minds, he also leads us to a conclusion that I myself have about the world of ghostly phenomena - no matter how many cameras we have settled on a haunted site or recorders, it's the humans who are there who see and hear these things with their senses that are often not picked up by equipment - almost never, in fact. And the same goes for Blobsquatches and sightings of the Big Man. We see them and experience them and hardly ever get good evidence. What is the factor here?

The book leaves me wondering the age old (if a tree falls in the forest and a person isn't there to hear it, does it make a sound) --

If a Bigfoot walks through the forest and a human isn't there to see him - does he exist?

I don't only highly suggest you read the book, it's a permanent part of my reference library and anyone who truly thinks himself/herself a Bigfoot researcher, should be adding up the dotted lines with the neatly laid path of this well written and researched book.


Note: I will be reviewing lots of researcher's books this month and one thing I do not like to affiliate with in any way in the Bigfoot field of research is anyone who is pro-kill and has no qualms about shooting a Bigfoot. That being said, when I review books, it is based purely on the content of the book and not the character of the person who wrote it. I cannot keep tabs on everyone in the industry and their stand on Bigfootery, as I am in my own research and not other-oriented. So, if it comes to light that any author I have given favorable review of has unfavorable character, that was not my intention to support them, simply to support the worth of their book. This disclaimer will be after ever review and is important to me because I work hard to dissociate from such types but cannot always know what is in the hearts of other researchers.
at 9:00:00 AM