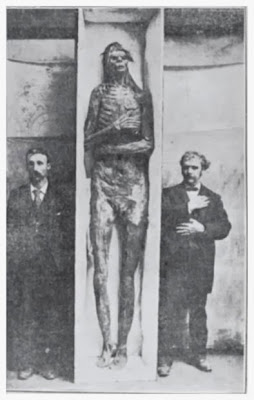 In the Sasquatch Genome Project, Dr. Melba Ketchum reported her findings from examining DNA from reported Bigfoot samples. She came to the conclusion that basically Bigfoot had a modern human mother, but a "novel" hominin father (in other words, a DNA not on file).

That started a firestorm, more about the way in which she released them in her own publication, than the implications of such a finding. It begs the question of what this "novel hominin" was that showed up supposedly around 15,000 years ago to mate with these modern females.

It's supposedly not a DNA we have on record. And, we haven't seemed to dig up any possibilities, well, except perhaps some ancient giant skeletons retrieved around the world. A giant from the past, who was on the earth when humans were - sounds like a good combination.

Occam's Razor:  With many hypotheses on the table, the one with the least assumptions is the likely correct one. So, with a potential "father" for Bigfoot of angels and aliens (making the most assumptions to contrive it to work), the simplest explanation is the giants that were already here.

We do know that Biblical text and even Native American folklore involve this giant race and the conflicts that ensued. But, if there was a race of ancient giants, the information is being held back from us (hence the finger being pointed at Smithsonian for squirreling away the bones which is accurate by newspaper reports). If there is a conspiracy to hide the reality of the giants from our history, then why?

If we look at what Darwin did; creating a split in science and Church, then something that might question both evolution as we know it and religion could put us into a real uproar; trying to figure out our origins and why none if it lines up logically or magically. It could be too, that some historic records from the past that explain what the giants were, are being held back because of earth-shattering reality they reveal.

It also might be that, if we learn about the giants, we might add 2 and 2 and realize Bigfoot is obviously the offspring of such a past union. The feral descendants that have remained in the wild, adapted hairier bodies for their outdoor living and remain powerfully strong as their ancestors, and exceedingly tall. As well, after races of modern humans tried to kill them off, they might have retreated in order to survive and taught that same fear and anxiety about humans that their ancestors had.

Why consider ancient giants as the novel DNA? Perhaps because, of the fossil record, this is the only giant we know of. It's a pretty easy connection to put ancient giants and Bigfoot together. Where else did that extreme height come from? A dominant gene, no doubt. 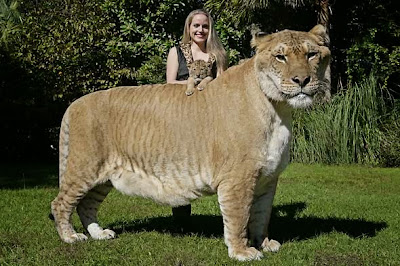 The Liger (Lion Tiger hybrid) can grow quite larger than either parent. Why? A male lion and a female tiger makes a Liger that is exceptionally large.  However, if you reverse those with a tiger father and lion mother, they produce a similar sized offspring called a Tigon. Lions are in prides (packs) and the males carry basically a dominant gene to be sure to impregnate the female who is mating with many lions in the pack. Tigers are more loners and that dominant "seed" is not a necessary adaptation. So, when a male lion mates a female tiger, he produces a very robust offspring.

In the case of ancient giants mating with human females, it's entirely possible that their genes were dominant and so the offspring were large. These offspring carry dominant genes to continue to produce tall children, even if they were to mate with humans again, so long as it's a male giant mating with a human female. So, in the case of Bigfoot, breeding in clans, that dominant trait would continue on and on and on.

If we know of only one exceedingly tall race in our past, then we must assume that the ancient giants mated with humans and it would seem proof of that in legends from the Bible about the nephilim. To explain tall beings by the mating of giants and human women, they are basically telling the story of the Bigfoot and its similar kinds from the Celtic isles to Tibet and everywhere else. These explanations for a tall race were worked into their stories passed down, like the Native Americans tell of warring with the giants and killing them off. But, did they just send their children into hiding? Did they war because they impregnated their women?

It would be the most easy explanation for the existence of Bigfoot is a result of a race that once was, and perhaps still is - the giants.