Bigfoot Is Not the Tall Silent Type 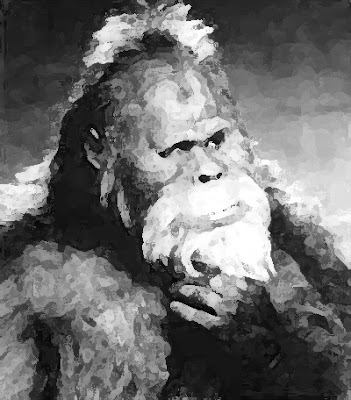 Wood knocking, rock knocking, grunting. These tend to be the most popular forms of communication perpetuated by television programs hoping to justify the Bigfoot-is-apeman concept.

But, Bigfoot is vocal. He is exceedingly vocal. You might think he creeps around the woods as a ninja, but nighttime recordings of him lingering in the pathways and brush show a very vocal side to these beings. In fact, some of the best evidence so far has come from audio rather than video. You can amplify the audio to hear them at a distance much easier than trying to zoom in and pixelate them on photos and video.

They imitate animals with uncanny ability and, at times, mockery. They also have language as well as regularly practicing hairless-humans' talk and inflection. Some habituators report that they even learn the family members' names having been called outdoors and call them back, sometimes in voices eerily similar to the members of the family. And, how else are you going to master the woodlands if you don't imitate all the creatures - even the residents on the farm?

I recently shared with everyone research I've been doing into samples of Bigfoot language. It is an ongoing process and I soon hope to share something with you that is extraordinary. All I can say is that, if you record the voices in the woods, please amplify the sound many times over - they do not speak nearby microphones - and slow the speed down by about 50%. You will find things that you didn't know were in the recordings.

Here is what I shared about language -

This video that MK Davis released that compiles different vocalizations and language was not easy to acquire. The videos that these were extracted from had only the faint distant sound of what might be talking. When MK greatly amplified the audio, the voices became apparent, as well as making dog barks, car sounds in the distance and roosters louder, too. I suggest to other researchers to amplify their audio a great deal to see if there is language that was not picked up near the mic, as Bigfoot tend to avoid posted cameras and recorders.

Ideally, you should listen to this (below) with headphones. You will be unsettled and amazed. I put some transcription below to help you to understand this and then I will discuss it in more detail below:

2:44 (growling, wrestling with something, grunting)

5:07 (distant voices- one sounds Hispanic and the other sounds deep-resounding Pacific Islander)

7:00 (LOUD screeching, knocking on something)

After listening to and transcribing endless examples of Bigfoot speak and evaluating this compilation- I have come to some conclusions:


They are an ideal American hominin because they pick up things from lots of other cultures around them and mimic or parrot a lot. As well, their language is a lonely one. Sometimes, these vocalizations sound like their own form of companionship when they are wandering alone in the dark.


Here's some things I pick up from this language example above:

2.  They do apparently name each other. I suspect some names we come across in this recording include; on-DON, ha-LOW-tee, na-SHO-ba (which means "wolf" in Choctaw) and perhaps a-DEE-nah (Adena is the name for the mound builders of ancient times).

3.  This language is genuine. Above, you hear repetition of some words, but on other recordings I have transcribed, whole phrases are repeated at different times and certain words and sounds are repeated throughout conversations, revealing that this is not nonsensical babble. It is consistent, as are the individuals speaking (who, over time, one gets to recognize).

4.  They make animal sounds, but they also can repeat words with English inflection and English words, Native language and inflections, and even upon occasion Spanish. Much of the other influences are as of yet not known, but sound to be Algonquian or Chippewa based, incidentally - the region where Adena mound builders were from. No doubt, as migrating people, they adopt others collected words when clans intermate.

5. They will form symbols with rocks and sticks and other things from the environment to form such things as medicine wheels and symbols that often mimic other ancient cultures (see below) and these often are presented as "offerings" of a sort for the hairless humans on the land.

6. On this recording at the 9:35'ish mark, it sounds as if he uses the word "caliente" (Spanish for "hot"), but pronounces it "ky-YEN-tah" which means that striking an "L" sound by putting the tongue behind the front teeth might not be possible. I have yet to find one using the "L" sound. This could be either cultural or a physiologic incapacity to place the tongue there. Consonants I often hear are K, M, N, B, H, D, S and T (which sounds to be struck by clicking the mouth open while holding the tongue in neutral). They have a full range of vowels which resonate for them in an almost anguished tone. If you practice the "N" sound (nah) which strikes the hard palate and L sound ("lah") which strikes the back of the front teeth with the tip of the tongue. Apparently, it would seem the more delicate flexible movement necessary to strike and "L" is not in their range of physiology or contained in their phonetic experience.

7.  Much of their sounds are resonated from deep within the chest cavity and in the throat. With longer vocal chords, it is absolutely certain that Bigfoot can make infrasound. There is a human with extra long vocal chords who has officially been gauged in the infrasound range. The purpose of the use of infrasound would be to reach long distances which would be necessary for a people who are not that densely populated in the wilds. Bigfoot also do not need to make sense when vocalizing, they simply vocalize as if practicing their sounds or letting off steam. You will note that many seem to be speaking to themselves.

8. They often either imitate an animal after it makes its sounds, like a crow or coyote, calling back and other times, they "mock" them like a child doing an imitation of a parent for laughs (listen to 12:56 above when they mock the ducks). Within the context that they mock others, it appears to be a form of entertainment. Given that they are hominins and of the human family, they are very crafty. The practice of imitating everyone in their environment, even the hairless humans, is vital. They blend into the woodlands physically and utilize the sounds of others to mask themselves.

9. The largest  conversation I've captured was between two individuals, so groups of Bigfoot running about talking during the night does not seem likely. It's led me to the conclusion that they are in very small and lonely groupings. When a member rattles off their group names, they could be only 3-4 names on that list. When they name the others, it may not even be that those clan members are local any longer. They may be repeatedly archiving to themselves the ones they are related to, like an oral genealogy.

What can we assume from this growing knowledge of Bigfoot language?

That they mimic and pick up from their environment and may also borrow spiritual beliefs, gods, and influences from ancient sources handed down. All of this makes sense when you consider the way in which they exist. We would pick up language from our country and dialects from our neighborhoods, but when a people are always on the move, they would adopt what they come across, they would borrow. They would have no real home base to draw from or record keeping methods other than passing on knowledge individual to individual and sometimes losing content in the process.

In fact, over generations of migrating and nomadic ways, much of their parents' language has likely been bastardized and they have adopted words heard on farms and rural settings where they observe the property owners and what they call out and speak about. They may assume word meaning by context, so witnessing someone calling in the cows, they may think "Yah!" means cows.

I have a renewed respect for these hominins - they are part of our family. Many thousands of years spent in feral conditions might have made them grow some thicker body hair, larger sizes, but they have not lost an inherent intelligence and survival skill set. These are not hominids or ape-family members.

I will continue to share my findings as I come across them. My research is ongoing. In fact, infrasound does seem to be an ability among them and as well I'm considering piezoelectric - use of geology and resonance from their chanting - creating some interesting and sometimes ill effects. These are more sensational avenues, but I like to remain open-minded.

My greatest hope is to some day come face to face with one and have a few words I can exchange.

And, then, my friends, the relationship between the big people and the little ones takes a remarkable turn.

Next time you're in the woods, look for some of these symbols - (these below are ancient mound builders/Adena symbols) which might be made into the dirt, shaped with rocks or sticks. 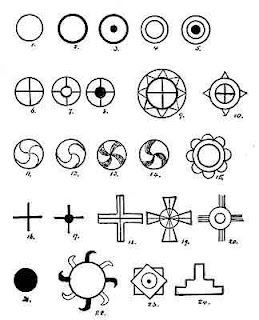 These below are Ogham, an ancient symbol system used in Celtic regions around 100 AD

These below are Native American symbols 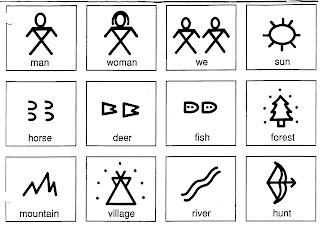 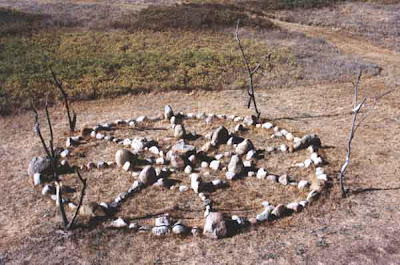 Potential communication experiments: (consider when you are communicating that you don't know how they will interpret your efforts, whether it's threatening or perhaps a mating signal, so do keep that in mind).


Stand in an area, turn and call in different quadrants your name. Hold your hands in the air to show they are empty.

Draw or make on the ground a circle within a circle and see if they complete the medicine wheel spokes in the design.  Or, begin one of the symbols above on the charts and see if one is completed for you.

Listen to this recording above and try some of the vocalizations that are more chanting or moaning sounding.

**Always be certain to documented your communications, especially the symbolic ones, to find out if they have changed anything you did, added something, and how this message unfolds as you each leave something new.**