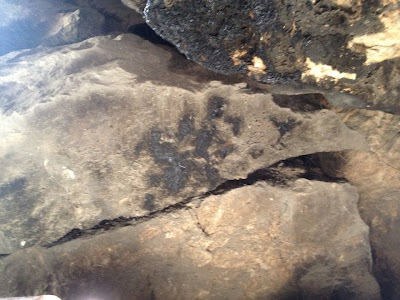 My readers might remember the Paranormal Geeks radio show when we spoke to MK Davis at the mouth of Lovelock Cave. When he went inside, he and Don Monroe discovered what appeared to be a giant handprint (about 18") made from the soot of the ceiling, seeming to verify once again the Paiute legends of burning the giants in the cave. The most reasonable scenario is that one of the clan had entered the cave after the conflagration to bury or seek his people and put his hand on the sooty wet ceiling and then on the rock as he moved things around. This is only a theory, but would explain how this came to be.

After reporting it to share information of ancient giants evidence being found today, someone went in and obliterated the handprint from the stone. A tragic loss and yet another example of why and how ancient giant evidence goes missing and why everyone must keep location under wraps but be sure to document well before things go "missing" or are taken by "powers that be."