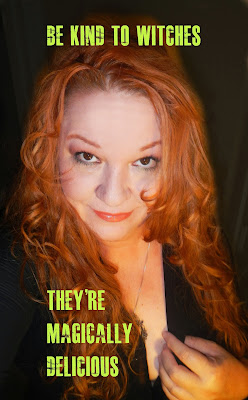 In the all-star cast movie Race With the Devil, some innocent RV campers run into some witches performing a human sacrifice and then they are on the run from the killers. There was no division in Hollywood between types of pagans. A satanist and a witch were one and the same, according to their fiction. However, in real life, witches do not have a devil figure in their spirituality.

Bad witches - a running theme in the 1970s Hollywood. They couldn't think of a worse evil than a pagan. Their portrayal of witches somehow being tied to the devil was unforgivable and ridiculously naive, smacking of Christian fears about pagans in general.

In the movie The Wicker Man, a beautifully portrayed film, the content was the same message - that witches sacrifice and kill people.


The Dark Secret of Harvest Home was another of the made-for-tv miniseries genre classics dealing with witch themes.  A couple moves to a town in New England to find the locals performing (gulp) odd rituals.

Mark of the Witch was a classic portrayal of witchcraft as evil, sexually based, seductive, and dark. It's about everything campy and cliche of the 70s witch-hating movies. It's one I am adding to my collection of utter campiness and 70s fear of rising sexuality and movement away from the church. It really showed in the terror of pagans.


Midnight Offerings had just come out in the early 80s, but still had the feel and the terror about the uses of witchcraft and spellbinding. This was a popular one for the made-for-tv types, starring two child actors turned teens -


The House That Would Not Die is about black magic in Amish Country.

With a growing fear about increasing sexuality and drug use among the young and less reliance on traditional religions, no doubt moviemakers were making cautionary tales about the "dark side" and "being seduced" by false gods and open sexuality.

The sad reality of this is that most Americans got their information about paganism from such ridiculous notions as witches are in cohorts with the Devil (not in their concept). Even as a child, witches to me had to be the most horrifying devious dark individuals. It wasn't until I was an adult and took a foray into all spiritual practices that I realized the basis of paganism which is the oldest of all religious practices - based on our dependence on the earth and the magic that we can produce with our own intention, a process that can be used for great good and protection.

Some witches that were a bit more fun -


We may never see people accepting signs like pentagrams (5-sided star) and pentacles (5-sided star surrounded by a circle) but they are as powerful an amulets as any holy cross. They represent protection and are used in evoking the powers that are inherent in nature, the gods, and the practitioner. Paganism is a sort of team effort and it has no Devil in its belief system. And, witches will admit, they believe what they send out comes back, so you do not manipulate others or send out negative energy.

I hope I've helped to clear up some ridiculous notions about paganism. All of our ancestors practiced it and, in fact, Christian ceremonies involve the interactions with the dead of Samhain at Halloween, pine of Yule for Christmas, and the eggs that represent fertility for Ostara in the Easter crafts.

Just remember this; any god is a false god when one does not believe.