What If There Was a Bigfoot Refugee? 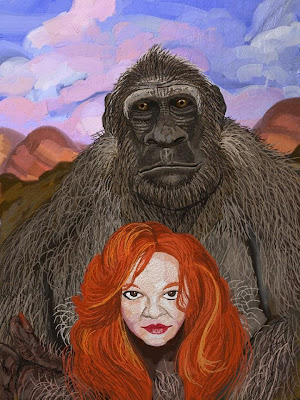 I got to wondering one time about what would happen if we have an absolute connection with Bigfoot, the government recognizes them, they develop whatever system they think is best to let them live as they know without harassment. As wonderful as these concepts are to the imagination, another thought crosses my mind repeatedly - what if some of the younger Bigfoot, having grown up much closer in contact with human populations, decide they want to join us now that the jig is up and we know they exist and they don't need to hide any longer?

First, we can assume the government would step in. There would need to be a caseworker, an ambassador of sorts, a linguist, a physician, an anthropologist, and likely a tribal elder from a local Native American tribe.

The refugee would need to be isolated against diseases he has never encountered. His basic needs for food and water and comforts would be assessed. He would not be overwhelmed with too many contacts. One person would have to act as his chaperone of a sort, someone he would grow close to, trust, and depend on to look after his needs and protection in the human hairless realm.

Seeing to his spiritual needs would be low on the list. The greatest interest would be his physical makeup, his circulatory system, organs, resistance to disease, and most importantly to the scientific community - his DNA! When it's determined he is considered human, the next concern is how intelligent is he? Can he learn our language? Be assimilated? Testing would have to begin, much the same as testing with chimps with pegboards and stacking and novel use of tools.

Eventually, a foster home of sorts would be necessary for him to have people to watch out for him and look to his needs and help him learn customs, lifestyle, language, and appliances, tools, and basic human mastery.


We can hope that it goes somewhat differently than it did for Harry.

How would Bigfoot end up entering the public eye? Likely his first excursions would be to watch the world from the window for a time before perhaps taking him to a park where there are more people with dogs and less cars and noisy distractions. He'd have to be clothed. Perhaps his hair would be groomed? He would never really be hairless, nor would he be short. Riding in a car would be out of the question. Even a convertible would not have leg room.

And, what if he wished to mate? Would it be allowed? What if he wanted to go back to his forest friends and convince them to join him in the new world? Or simply go back for a vacation? What would his rights be to work? Own property? Travel?

As unusual as this scenario may seem, with Bigfoot living in areas where humans are encroaching in the woods, driving down the roadways and camping out near their hiding places, the youths are likely to wonder about having a life with lots of "things" and abundance of food, toys, and dry places to sleep. So, as unusual as this may seem, it could very well be a future dilemma.

And, how we handle their numbers among us will say how far we've come since we set up Reservations, schooled and assimilated the Native People.