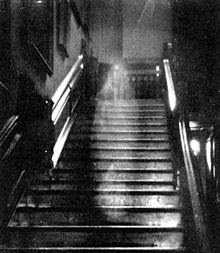 I'm kicking off a serious turn-the-para-world-on-its-ear week here at GHT with a post about evidence versus proof.

The best a paranormal investigator (ghosts or Bigfoot) can hope to make a case for a place being haunted or Bigfoot existing, is to gather meter readings, witness reports, photographs, video, audio, castings, and the like and present them to give a preponderance of evidence to sway a conclusion about the existence of ghosts or Bigfoot. We see this demonstrated on shows like "Ghost Hunters" where the team tries to see if they have enough evidence to say a place might be haunted.

We see it all the time, film like Patterson-Gimlin of a purported Bigfoot walking across a creek bed, still being debated as "proof" of Bigfoot almost 50 years later. All it can be called is evidence and we know that evidence can either be tampered with, gathered incorrectly, interpreted incorrectly, and hoaxed. So, either you become a believer using your eyes or you become a disbeliever based on the possibility of hoax.

The best evidence can do is sway a belief, but a belief is different animal than proof. Once one believes something, it can be hard to get them to use any other interpretive skills other than those created by the belief. We all know investigators who believe every sound, every chill, every smell is a ghost. They believe in ghosts, they believe the place they are in has to be haunted, so their interpretive skills are colored by those rosy lenses of belief.

So, where does this take us with getting "proof" in the paranormal world?

It's exceedingly difficult to prove things like alien visitation or ghosts existence, although a capture of a Bigfoot would certainly clear up that cryptid question. Some great minds in the field are finding ways to make science and math work towards statistically proving the paranormal, like Dean Radin's fantastic work with the statistics of psychic hits. It's a pretty straightforward study, set someone down, have them take psychic tests like these and do the math. Conditions are all the same in dealing with psychics.

But, in the field of paranormal research, if you have a hiker finding hair on a tree or a person performing an EVP session, there is no way to know about how the evidence was gathered. The variables are just too numerous to punch into any "validity" meter. Was the person hoaxing?  Was he colored by his desire to see things the way he hoped they would be? Did he use gloves and a sterile bag? Did he turn off the air-conditioner and check for outside noise contamination?  Just look at the context of the Patterson-Gimlin film - the men went out looking for Bigfoot and wouldn't ya know, they found her! Sometimes, those sorts of things can make us dismiss what might be compelling evidence for the simple reason of the persons' motives.

I learned at a young age, recording the booted footsteps in my home, that no one was going to believe it was a genuine recording of a ghost (see "Growing Up With Ghosts"). I had to step away from trying to prove a set of experiences I had my whole life as being genuine hauntings and simply study the phenomena for my own edification. I looked for patterns, what set it off, what made it quiet, how it showed itself, how I felt before it showed itself, who was in the building... trying to find something other than randomness to understand the phenomena.

Look at it this way - a person can believe in the Bible and be Christian and they can't make others believe the same faith, but that doesn't stop them from praying and honoring the doctrines within the Bible. As a researcher, sometimes you need to step away from convincing others of phenomena and simply walk the walk, talk the talk, and pursue your passion in search of answers.

What you want is to have a body of experiences where you begin to see subtle things about the phenomena and perhaps learn how it works, when it works, why it works. We often get caught up in having proof, but proof is always countered by "bah, baloney!"

I advise people to ghost hunt and investigate Bigfoot without any gear at all; not even a camera, simply go with the intentions to be totally present and have an experience. Have lots of experiences. Learn from all the conditions in which you have encounters. The minute you get caught up in gear and gathering proof, you have missed the action.

There is nothing more elusive than a ghost or Bigfoot knowing they are being tracked.

Real cases do not get wrapped up in 60 minutes with a neat bunch of evidence to show a client. The real research world doesn't work that way. Everyone has a day job and a family. They can take weeks, sometimes months to review audio and video and come to a consensus. It's not always neat presenting to a client, either. Exactly what is the criteria of evidence that constitutes proof?

It's healthy to occasionally step back from your studies and ask yourself why you are in the field. Did you have an experience you want to explain (personal journey), want to educate others about the mysteries (tour guide), or to secure a TV show (ego). Once you know what you want out of this field of study, follow that calling.  And, like Julie and I wrote about in our book "Paranormal Geeks," you might just find you're a category - like historian - in which you might be better served looking up the genuine history of a site and the reported hauntings there, putting it together in book form. Or, you might be the spiritual type who is more engaged in how to treat the other side and comfort the family.

All you need to know for now is that there is no proof of ghost, Bigfoot or aliens. So, now, go and learn more about it without feeling the need to prove it.