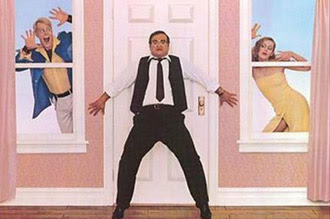 It's impossible to avoid the freaky neighbor issue in real life. At some point, all of us have had ones that baffled, confused, grated, annoyed, and generally pissed off. For years, I had a neighbor who was so hidden, it was like living next to a vampire. For years, we never so much as a caught a glimpse of them except to hear them stirring at night in their back yard. We came to call them the "Klopeks" from the movie "The Burbs."


The Burbs ****
This 1989 film starring Bruce Dern, Tom Hanks and Carrie Fisher is one of my all time favs! It's a comedy with dark tones. Curious neighbors wonder at the new hermit neighbors in the creepy house on the block. Their obsession takes the best of them and they cause lots of goofy mistakes as they try to uncover what the Klopeks are up to.


Neighbors ***
This 1981 movie is a cult classic funny one. Dan Aykroyd and John Belushi at their goofy best. Staid and boring neighbor is not comfortable with the intrusive weird new guy next door screwing up his orderly dull life and the sexy wife that is coming onto him. This is a totally dark humor commentary on suburban life and a fun ride!

Disturbia ***
This 2007 movie starring Shia LaBeouf is a new take on "Rear Window" and a pretty fun one too. Kid is under house arrest and has nothing to do but watch the neighbors from his window when one particular neighbor concerns him as matching the description of a killer. This is fun, great soundtrack, and good climax.

Rear Window ****
This 1954 Alfred Hitchcock classic starring Jimmy Stewart and Grace Kelly is a cinematic wonder. When a man used to be in the field photographing in dangerous places is hung up with a broken leg, the back window is the only view of the world he misses. He starts to study a neighbor whose wife suddenly is no longer the apartment and is certain he has a killer in view.

Lakeview Terrace **
This 2008 movie starring Samuel L. Jackson is a chilling movie about an LA police officer who doesn't like the interracial couple who moves in next door and torments them to no end.

Fright Night ***
A 1985 campy horror movie about a vampire (Chris Sarandon) moving in next door to a teenager who is very suspicious of this odd character. He adds up that the man is a vampire, but can he get anyone to believe him?

Stepford Wives ****
A 1975 classic movie making a dark statement about perfect wives. A couple moves to a quaint town, but something is wrong; the women seem to be changing into caricatures of the perfect wives.

Bay Coven **
This 1987 movies starring Pamela Sue Martin and Tim Matheson is a chilling one about a couple moving to an island that seems quite idyllic but harbors some kind of evil sorcery cult.

The Dark Secret of Harvest Home **
This 1978 film starring Bette Davis involves a couple moving to a New England village and getting mixed up in mysterious rituals.

The Sentinel **
This 1977 movies is about a model who moves into an old building renovated as an apartment complex. Her neighbors are quirky and not all together real.