The Mothman and Point Pleasant

When Julie and I hit the roadways of West Virginia recently, we had to go to Point Pleasant because, what kind of paranormal geeks would we be if we didn't? This particular cryptid is one of my favorites because he seems so infeasible physically and yet so chilling if he truly exists.

Admittedly, as we began onto the bridge, both our cameras' batteries died at the same moment. That was beyond coincidence. We have vastly different cameras and vastly different battery needs. I began to ponder it and wondered if the conditions of running water and bridge, right humidity and air currents, might have created a Faraday Effect.

The town is so charming! If I wanted to get away from it all to a smaller town and a beautiful place with an interesting feel to it, charming houses, and polite nice people, Point Pleasant, WV would be it. 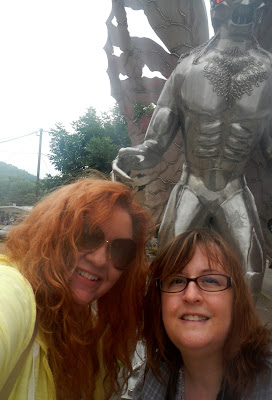 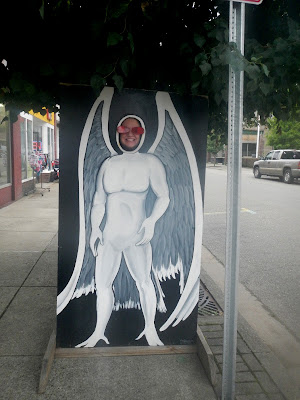 We felt compelled to also take part in the touristy things. And, I readily admit, I purchased an ornament (love to have paranormal ornaments on the tree) and a shot glass (I get one everywhere I go, even though I have never drank a shot before).

This cut-out (above) was found in front of a charming gift shop ("The Pointe") with an equally charming owner. He carried humorous items, as well as some interesting ones, like pieces of the broken bridge and the postcard (below). We began a conversation about mothman and he shared a photo taken in the second TNT bunker where supposedly the most activity occurs related to mothman. He explained to us that Chip Coffey, the psychic, had come up with the name "Chee Ho Way" a supposed Shawnee Indian. The face was from an orb photo taken in the bunker - 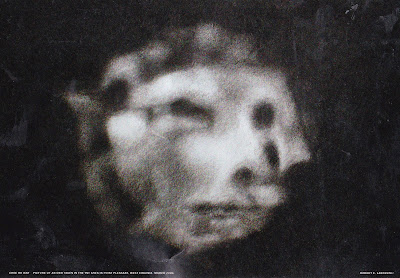 There is an interesting connection between Mothman and Ohio Native American legends involving "flying heads."

"The Mothman spread its wings and pursued the eyewitness’s car. Then on December 4, 1966, five pilots at the Gallipolis airport saw what they thought, at first, was an airplane, going 70 mph. Then all five clearly said it appeared to be a giant bird, with a long neck. On December 7, 1966, four adult women were driving along Route 33, in Ohio, when they spied a brownish-silver man-shaped flying creature with glowing red eyes.

"But the history of Ohio’s links to these avian wonders go back deeper into the past. In Mark A. Hall’s 2004 book, Thunderbirds: America’s Living Legends of Giant Birds, he finds old Ohio cases. Hall uncovered this entry by William Connelly in this entry among the Wyandot Indians from Ohio: “The Flying Heads plagued the Wyandots. They were more dangerous and troublesome during rainy, foggy, or misty weather. They could enter a cloud of fog, or mist, or rime, and in it approach a Wyandot village unseen. They were cruel and wicked hooh-kehs and cannibals. They caused sickness; they were vampires, and lay in wait for people, whom they caught and devoured. They carried away children; they blighted the tobacco and other crops; they stole and devoured the game after the hunter had killed it.”

"Hall also discovered report from the early 1900s, of large birds with wingspans of 12 feet across flying up and down the Ohio River Valley. During World War I, there were accounts of “Birdman” with glistening dark reddish feathers seen in the same area, around Gallipolis. Children were kept inside. After World War II, people said they were chased by a huge bird while traveling on the highways near the Ohio River.

"Cryptozoologist Mark Hall writes that these Ohio River Valley Mothmen may have developed a protective mimicry that was used “to disguise themselves as upright trees and logs lying on the ground…An example of this mimicry in action comes in a report from a woman in Ohio who observed something she could not understand. She saw this thing at Rocky Fork Lake in southern Ohio in August of 1982. About a year later she saw a similar sight at the same lake.” The witness said that “…while fishing in Rocky Fork Lake in Ohio we drifted into a pristine cove on the southwest side and noted with utter disbelief an old tall topless tree truck approx 9-10 feet high, 112 inches around, move about 4 ft. sideways. (This was on shore about 20 ft. inland among like-looking trees and underbrush.) Again it moved, only this time there was a partial twisting or rotation from the top 18-24 inches. It slowly maneuvered backward (keeping erect like a tree) into the woods, with NO NOISES from it or the underbrush, as graceful as a bird thru a tree. It stopped in the middle of a sunlight clearing…” She then writes the “wings unfolded with a span greater than most small airplanes.” After a while she reports it returned to its “tree appearance.” She saw the “semblance of two eyes” and thought it was watching them.

"The sun went down and the sight was lost to view. Then: “One year later, same lake and a half mile or so from that first cove this figure appeared near the shoreline again. (It seemed taller or leaner.) This time [I] got a look at its legs and feet —yellowish grainy like chicken legs…they were so thin and short for its height. Three long slender toes with a hooked toe or nail on the lower leg.” The legacy of the Mothman, hiding in plain sight, is still circulating in the communities on the Ohio side of the river.

Some speculate that the thirteen months of Mothman sightings in were a warning sign that something tragic was going to happen. They believe that the dark prophecy was realized when key bar #13 of the Silver Bridge broke on December 15, 1967, and the bridge between Point Pleasant, West Virginia, Gallipolis, Ohio collapsed, taking cars and people to their death. Tragically, a state-by-state breakdown of the dead from the bridge reveals that two were from Virginia, three from North Carolina, 19 from West Virginia, and the greatest number, 22 victims, were from Ohio."

In considering the Shawnee of Ohio area, they have a good deal of legends involving creatures. I am intrigued by the Ohio Valley area and the Shawnee/Alonquian language, and legends. These seem to tie into mound builders as well as language and symbols utilized by Bigfoot. Even the legend of the little people are reported alongside of sightings of Bigfoot. What magic is the Ohio Valley the seat of? I'm not certain, but my theory wheels are turning on this one.

While there, we got a map of how to get to the TNT bunkers where Mothman was believed to hide. Julie and I could not help ourselves, we had to follow it - 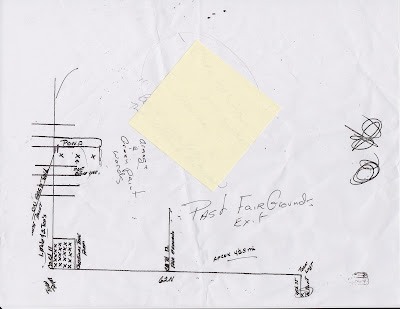 Directions to TNT Bunkers: South on Main St. toward 4th St. Turn left. Left on the 62. Travel about 5 miles, past fairgrounds, and when you see the Christmas tree farm, turn right at the end of it. Now, count the little side notch places a car can pull in and park and when you get to the fifth one, you'll see a wooden sign tacked to a tree and a pond. That's the one. Pull in and park. Hike the trail back. There are 3 bunkers and the second one is the magic one supposedly.

We pulled over and parked the car on a very wooded and quiet nowhere country road. As we climbed out of the car into the heat and humidity and bright greenery, we studied the pond nearby. 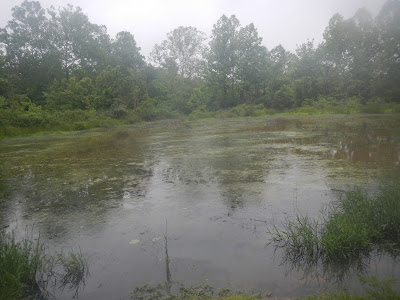 Julie and I looked down the faded path deep into the woodland area, knowing it was going to be a lengthy trek and then looked back at the car, considering our vulnerability. 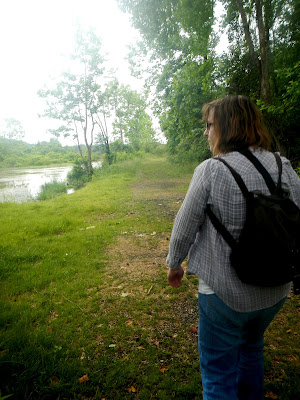 Before I even sensed Julie's discomfort at the precarious isolation and our car showing that we were there, alone, I started to get an intense feeling of being watched. I wasn't sure whether to share that with Julie. She was looking back at the car, wondering what the hell we were doing. I didn't want to come that far and not go to the bunkers, but I too was considering what I had at the ready for a weapon. I stopped, pivoted, and scanned the woods. Then, the tree tops. A shadow blocked out the sun, casting a deep shadow on the land like a moving bird overhead. I looked up. Nothing. In fact, the entire woods were silent all at once.

Then, I felt compelled as if someone was warning me, to look back at the car. A police truck slowed down and then backed up. I turned and photographed the pond and we went back to the car. The policeman asked us what we were doing. I told him we were photographing the beautiful pond, we were on a trip from Arizona, and photographing the countryside. He lingered until we piled into the car to leave. I am thankful for him, actually. We shouldn't have considered such an isolated trek without some form of protection. The intuitive is important to listen to.

If you wonder if Point Pleasant still has a lingering Mothman issue, I am not certain, but there is a lingering melancholy about the place and a weird feeling by its isolation as if it's the town time forgot. It Twilight Zone took on the shape of a town, this would be it. I was recently contacted by someone whose family saw Mothman in Charleston, WV, and all over the world people have reported similar winged harbingers. Are they here to witness events, to warn or to precipitate?

Some other things to consider - Shawnee legend has a flying man/creature. Is Mothman long-lived and through many centuries? Is it possible that if the legends are true that the TNT bunkers are atop Shawnee burial ground, that perhaps we are dealing with a skinwalker or Native entity that hopes to protect the region? Is the face on the postcard above that of the Mothman himself or a Native Shaman?

Many things to consider...