LAUGH: Finding Bigfoot In the Snow 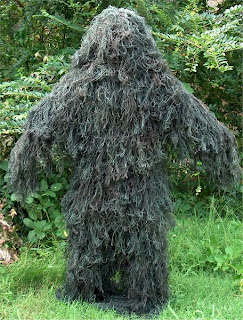 I have a tendency to make loving fun at the shows I most enjoy. "F'ing Bigfoot" (as I like to refer to it) is my most beloved new show on TV.

In this episode, we find the team searching for BF in the icy mountainous terrain of Colorado in search of the popularly termed "Snowbeast."

Ranae: (Lifts her pack over her shoulders and hikes through the snow) Boys, if you are all done urinating your names into the fresh snow, could we please move on before nightfall?

(the men track in after her towards the treeline)

BoBo: So, I don't get it. Technically, if this is a Snowbeast, it should be white. That'd make it a Yeti, right? So, what's Yeti doing in Colorado? Does his coat change when he goes down in the off season to lower elevations. If he does that, wouldn't it make him like a mood ring? I once had this mood ring when I was a kid and the dang thing was always blue. Maybe he's related to a chameleon. You think that's possible, huh? Cause if it is, he might not be a hominid. He'd be like some kind of lizard man which reminds me of the lizard man in the Carolinas. Did you see what that SOB did to that person's SUV? I wonder if the insurance paid for that. What do you write when you make that claim, huh?

(Matt smacks him upside the head)

Ranae: This looks like a good place to set up.

Matt: I think this area looks ideal for setting up camp and some trap cameras in the periphery (points around them).

Ranae: (to Cliff) Didn't I just say that?

Matt: (forehead wrinkles) Are we letting viewers pick our spots now? Jesus! Do we want this to be like "Ghost Hunters" having on special guests from wrestlers to housewives to, heaven forbid, Meredith Vieira?

Cliff: No, Matt, Ranae is on our team--the girl. You know, the skeptic?

Matt: (shrugs his pack off his shoulders and sighs wearily) She's still with us?

Ranae: Ah, I can hear you Cliff.

BoBo: Whatcha want me to do this time? Huh? Huh? (excitedly waves) Maybe I could stand in for the Snowbeast and you can see if I look like him. Maybe I could run across the field real fast and you could clock my speed. Remember that time it took me 50 takes to get just the way you wanted, Matt? You want me to be your pack horse again? I can carry all your heavy gear to prove the strength of the Bigfoot like that experiment you had me do on that 18-mile hike. Do you need me to be your car jack when you work on your truck again, Matt? Remember that time you left me in the meadow overnight when it was pouring rain and 40 degrees because you wanted to see if Bigfoot could stand the cold and the rain? I can't wait to see the experiment this time (claps his hands excitedly).

Cliff: BoBo, we were kind of thinking you might be a good lure for Snowbeast.

BoBo: (grins proudly) So, you want me to be bait, huh? So, what do I do? Beat on my chest and holler? (pounds on his chest and screams)

Matt: (comes over and shoves two snowshoes in BoBo's hand) You're going to wear these Bigfoot snowshoes and make impressions in the snow. Bigfoot surely is desperate to find more of his kind. You just walk your way through the forest and head on back here where we can be ready to snare him with my camouflage netting (points up to the trees where a net is suspended)

Cliff: Here, you should wear this Ghillie suit too (hands it to BoBo). It'll make you look more like a Bigfoot if he sees you.

(BoBo hoists the fluffy suit on and then the snowshoes)

Matt: It's my own special blend. I'm thinking of marketing it. It's the musk of a baboon mixed with orangutan dingleberries, the sweat of a fertile chimp and the spit of a gorilla. There's a subtle undernote of skunk and stinkbug juices. (inhales it deeply and sighs dreamily) Isn't it remarkable? It's like perfume of the gods! (dabs some behind his ear)

Ranae: (elbows Cliff) You get to ride shotgun on the way back.

Matt: So, BoBo, how good are you at sashaying?

Ranae: (chuckles) I think what Matt is trying to tell you is that, (she reaches into her backpack and pulls out two balled up pairs of socks and stuffs them inside BoBo's ghillie suit) You're going to be a girl Squatch.

Cliff: (checking the ghillie suit to be sure it's fastened) Now, you be sure and alter your Squatch call.

Cliff: Yeah, buddy, (slaps him on the arm) Can you do a kind of Shania Twain scream?

Matt: I actually think a Christina Aguilar scream might be attractive to the beast.

Ranae: (under her breath, rolling her eyes) Attractive to the beast or you? (snorts) BoBo, just go out there and there and walk around, we'll film your footprints, look at you on the FLIR and shout that we see something in the trees, cut away to a commercial and before you know it, the show is cobbled together to look like a mythical beast was chasing you. (leans in and whispers to him) We all know this is a ridiculous endeavor, but my ass is cold. Let's get going, shall we? There's a hot latte at Starbuck's with my name on it! (slaps him on the back)

(BoBo stomps away in the snow as the last bits of light disappear and a moonless night begins. An hour goes by and the team stomps in place and hugs themselves to stay warm, occasionally hearing a pitiful wavering cry in the forest)

Cliff: Poor BoBo. He sounds like Carol Burnett doing the Tarzan call. Maybe we should call him in?

Matt: Wait! I'm getting a figure on the FLIR. It's walking upright! Oh holy hell! It's huge! Get ready, Cliff. Go to the net, be ready to drop it. That beast is almost here. Three. Two. One. Drop the net!

Cliff: (pulls the cord and drops the net) Wow! I can see something struggling. (turns on his flashlight and hovers over the struggling figure in the netting)

Ranae: Well, I'll be! That thing is hairy, big and smelly. Just like people have been reporting. I'm feeling pretty stupid about now. Obviously, this creature did exist.

Cliff: Ah, Matt, it appears we've caught BoBo (pulls at one of the snowshoes through the netting).

(an hour later, the team is driving off in their truck down a snowy back road)

Cliff: (rolls down the window, BoBo jogging alongside the truck in the Ghillie suit and snowshoes, breathing hard)

BoBo: S-ure. So, I'm just gonna run alongside the truck back to the hotel, huh? See if Bigfoot could keep up with a car. G-great experiment. Th-that Matt is one s-smart guy!

(Cliff hands him the apple, rolls up the window and Matt turns up the heater)