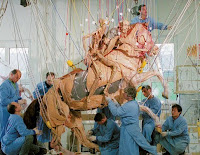 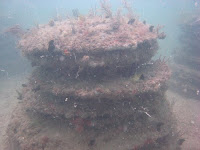 I can't help it. I have an evil sense of humor, so try and stick with me as we discuss the "grave" business (pun intended) of what to do with your carcass when you're gone. Some of the alternatives had me laughing and cringing as I discovered these really weird and interesting things to do with a dead body. There is no other approach to this bizarre subject than tongue in cheek...

MUMMIFICATION: Summum Mummification of Transference says, “Gifted artisans design each Mummiform to exact specifications. The Mummiform and "life mask" can be designed to incorporate the symbology of any religious or philosophical belief that you may hold. Everything is created in exact accordance with your wishes, as set forth in your pre-need arrangement." The casket can then be put in the ground deep enough that the cold won’t bother your remains or triple casketed. The price, you ask? The current costs for Mummification services are $67,000* within the continental United States." (Personally, I'll only do this if my servants are buried with me).

VIKING FUNERAL: Of course, I’m frustrated that Viking funerals are outside the law. One woman wrote online asking about them since her husband wanted one. I laughed for a good 15 minutes when I read one person’s response in the chatroom, “you mean put in a raft and set afire? I think that can be done…” (somehow I envision this dude with a canister of kerosene and one of those Bic fireplace lighters waiting at the edge of a lake with a Walmart pool raft exchanging some crisp bills to “do the deed” while he downs a Budweiser).

GREEN FUNERAL: The rage nowadays and actually not a bad idea. Nixing the embalming and burying in bamboo and cardboard in a green hillside where the only markers are trees or bushes and no one would guess it’s a cemetery. (I just have one word for these places, "Poltergeist." I do recall a wonderful gem of a movie based on the idea of a subdivision being built where a cemetery was. Some Superstore is going to eye that plot of land and no one's going to remember it was a cemetery. What an excavation that'll be!)

FAMILY BURIAL: No, not burying your family with you! I wrote about this recently and it’s a creepy and not often talked about thing most often in rural areas (God, I hope so!) Folks are opting to design their own casket with their family members working on the artwork and having a solemn, quiet, peaceful send off with just the loved ones on a happy corner of the yard. You know, that place the family dog likes to bury his bones. (It's going to be Christmas for him every day!)

SPACE: Yeah, it’s the final frontier, but for some folks it’s the final resting place. I had to wonder (and thankfully the site for Celestis tells us) if we become space debris that falls to earth, because it would seriously suck if I were launched and then came back to kill my offspring. What really happens is not that you necessarily go into deep space and land on some happy planet and are revived like Spock in “Star Trek: Wrath of Khan.” This involves being in a rocket that orbits the earth until it finally fails and burns on reentry into a blazing glory. (Well, I don’t know about you, but I think that’s one fucking expensive and delayed cremation plan. You'd save money catapulting your urn into the night sky and hiring fireworks to be launched simultaneously.)

CRYOGENICS: Have your head lopped off and frozen indefinitely. Of course, that ain’t gonna get you a new body to attach to later on. (nor will it guarantee that in 2090, someone isn't going to throw the breakers on the old building before teardown and let you spoil...)

WAYS TO USE YOUR BODY AFTER DEATH:

ART: What if I want to donate my body to something worthy or even beautiful? Body Worlds (photo above) is a traveling show with real human displays. Your body fluids are replaced with a hardening polymer. (Jeez, aren't actresses in Hollywood already into this craze while alive?) Believe it or not, the waiting list is long, 6500 people wanting to donate themselves. (I think I'm a "piece of work," but not necessarily a "work of art." Besides, as much of an exhibitionist as I am, I don't see myself wanting to display my innerds, just my outards...)

RESEARCH: Donate your body through a local university. There’s no telling if you’re going to be used to understand disease or as a practical dissect for incoming med students, but you will be helping someone learn something and if you never did that in your lifetime, this may be your chance. (However, there's no telling what affectionate name the students will give you, so if that produces chills just thinking about it, move down the list to the next one...)

ORGANS: As well, you can donate your organs and honestly really should! My brother donated his organs and a woman in Greece was able to see again! Another person underwent heart valve surgery and survived. I am on the list and hope to keep myself healthy throughout life so they can still be salvageable when I'm say, 110 and decide to finally let go of them!

REEF: You couldn’t live underwater while alive, but when you die, you can join the building of a reef for sea life. At Great Burial Reef they turn you into a part of the reef (photo above): "Living ocean reef burials are performed individually and privately. After a brief dedication ceremony, the sealed burial reef is carefully lowered to the ocean floor by our crew. The precise GPS coordinates of the burial reef are recorded and provided to the family on a Certificate of Living Ocean Reef Burial." I actually really dig this idea—might consider it, (but if your family was a bunch of leaches, you might just be sick of others living off you, so perhaps not an ideal resting spot).

No matter how they discard of your carcass, what really matters is what you do while you’re here. No one will remember you for your send-off unless they were joyously awaiting it (in which case you need to work on your social skills).

It truly does come down to ashes to ashes, dust to dust (well, unless you go mummy and then that's more like plump to dehydrated...)