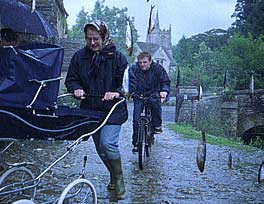 Talk about oddities!  There is nothing odder than having it rain fish.

The theory has been that winds and water spouts crossing over water pick up the lighter fish and carry them, dropping them as the winds die down. Although it hasn't been tested in action, the theory is the logical one.

A desert town in Australia was astonished to see it raining hundreds of fish from the sky. The fish had traveled hundreds of miles and were still alive when they hit the ground. It was believed they were picked up by a tornado.

Check out this story:
The phenomenon of 'The Rain of Fish' or 'Lluvia de Peces' has been occurring in the Departamento de Yoro of Honduras each year since the mid 1800s. The occurrence has been puzzling not only the residents, but also scientists since it started. Each year witnesses report that in May or June, dark storm clouds, accompanied by thunder and lightning will appear over the horizon and move over the region. The clouds are accompanied by a very heavy rain which will last upwards of three hours. Once the rain has finished, the city streets are littered with living fish.

National Geographic headed to the region in 1970 and were able to witness the event, though they were unable to offer up an explanation. They were able to determine that all of the fish that appear are roughly the same size, and are all the same species. What's more puzzling is that this particular species of fish do not inhabit any nearby waters. One scientific theory is that the fish are sucked up in waterspouts formed by the high winds. Some think that the fish may be flying in from as far away as the Atlantic Ocean, which is some 200km away. Another theory suggests that the fish may be residing in underground rivers in the area.

While science has yet to offer a definitive explanation, the residents believe the annual event is nothing short of divine intervention. Between the years 1856 and 1864 a Catholic priest by the name of Father Jose Manuel Subirana was living in the region. Many Catholics, especially those in Honduras, consider him to be a saint, even though the Vatican never gave him such an honor. While he was living in the area, it is said that he spent three days and three nights in seclusion and prayer, asking God to tend to the impoverished nation and provide sustenance. The legend says that when the Father had concluded his three-day prayer the first 'Rain of Fish' occurred, which has continued to this day. Upon arrival of the miraculous fish, residents are all too happy to rush to the streets collecting the fish for sustenance and nourishment.
Starting in 1998 a festival has been held in honor of the event in the city of Yoro. It is also worth noting that in recent years residents have been reporting not one, but two occurrences of the 'Rain of Fish' each year.