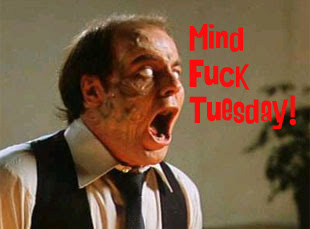 Some things we know about shadow people -
They appear to be black and dense, not necessarily a shadow.
They can show up anywhere, from outdoors to new homes, offices to haunted locales.
People see them first out of the corner of their eye usually and then turn and catch sight of them.
When the shadow person realizes it has been seen, it vanishes.
They can be tall, but the majority are reported as about 4 feet tall.

Some theories about them include a spirit trying to form, a demon, a noncorporeal being (had never lived as a human before), and an interdimensional being.

The other most intriguing possibility is that when we sleep we might astrally project our spirit from our body and go onto adventures, acting things out in that realm. When a conscious person sees us, their conscious recognition of us, startles us awake back into our body.

This one intrigues me a lot because of something my mother told me. She had a ghostly encounter in our home when I was a kid that was someone we knew, the sea captain who lived down the street from our summer home. He showed up in my mother's room at our main home, sitting in a nearby chair, only he was 3/4 of his usual size. She realized then that he had passed. She just instinctively knew it. An hour later, the phone called and his wife told my mother he had passed. This sort of "condensed" version of a person might sound like something out of "Phantasm," but it could be that our perception of spirits is a bit skewed due to the qualities of its spiritual existence.

This theory also neatly explains how these shadow people can show up anywhere, not necessarily haunted locations, but city parks, sidewalks, office buildings. An astral body could and would travel....

The mechanics of astral projection are an odd one. When we sleep, we go into the dream phase of sleep cycle in which our body becomes paralyzed so we do not act out the things going on in our minds. It keeps us safe, but it also means our minds are shaking and rattling within our frozen bodies. There is no better time to instigate the peeling of the spirit from the body and leaving its limitations.

It's hard to tell just why we appear either tall and slender or a midget version of ourselves in the astral plane, but it might have to do with the very space between molecules. With no physical form, there is no need for molecules to push against each other and keep us from being able to basically walk through walls. In physical form, we appear solid, even though we are not truly solid, we simply are made up of atoms that repel each other and attract each other like magnets. If our spirit self is not made up of atoms that create a solid mass, then perhaps what we see in our spirit selves is a black dense shape of how we perceive ourselves from our lifetime frame of reference being limited by the confines of our vessel; with arms and legs and head and body, but without any of the matter that would give us detail. We would be devoid of particles that give us texture and color and therefore we would appear as small, human "black holes."

Think of your shadow in midday sun....

When we see an apparition that is in clothing, walking and moving about, looking as they did when they were living, we may not actually be seeing a ghost. We maybe seeing a residual haunting, a visual replaying in the environment from a time in the past and so we are seeing its living form, not its spirit form.

Hopefully, today I've given you reason to keep your minds sharp early in the week. I'd love to hear your input as to what you think is going on.