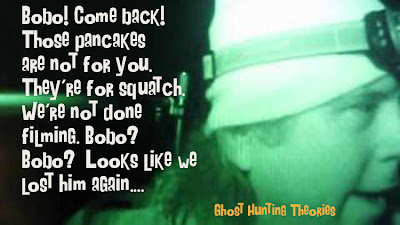 Last night was a 2-hour special from Australia in search of the Yowie, the Aussie equivalent to BF.  They found a good witness who is an expert on biology. Not a bad person to have witnessing a Yowie, but Ranae wasn't sold. Since it was the size of Bobo and the encounter wasn't all that clear, she said she thought the witness was awesome, but the encounter isn't necessarily a Yowie.

BEST LINES
Bobo:  Basically he was my size and my height, so you're saying he was built like a Greek god?
Bobo:  I'm not sure what the Yowie was doing, but I'm pretty sure he was doing something to get some grub.
Cliff:  I'm practically playing patty cake with two of them!
Ranae:  I'm right here you big hairy fella.
Matt: So you and me, birdie, we're camping here tonight.
Bobo:  Ranae's horse is as a Prince fan, purple reins.
Cliff:  This is a Yowie buffet.
Ranae: This is a Yowie bite-sized portion.

They did some nighttime wood knocking. They got a thump back. Bobo decided to put an Aussie drawl on a Yowie call.  Bobo tried to use a Didgeridoo to make some low tones. When the nighttime hunt didn't produce much, they decided to do a town hall meeting. Poor Bobo, a kid had knocked a tooth out on him during one filming of a previous show and then he got a huge cut from a boomerang on this one.

I liked the town hall meeting. Their dialects are so beautiful to listen to and it sounds very similar to American accounts and conditions.  Gutted goats were hanging in a tree without their organs in a scene like "Predator."  Terrain and food sources looked very promising and the untouched land was so vast and tropical. It was ideal for him to hide and hide easily.  Ranae found the forest to be very creepy at night, alive with sounds of lot of creatures.

Bobo went in search of an unusual creature called a Brown Jack. Matt on a solo expedition hopes to attract Yowie with the smell of smoke and cooking meat. He attracts...a bird. A man tells a story of the car shaking when he was sleeping in it.  The car had deep dents on the roof and two huge  footprints on the ground. The team was divided on whether it was Yowie or not.

Bobo, Ranae and Cliff went in search of Yowie in an area where folks were reporting it recently. They got horses and took off.  They tried some knocks and got a response. Cliff tried claps and got good responses. Ranae heard something big moving around her and asked them to bring a thermal so they could see what it was. Cliff looked with the thermal and didn't see anything and then they heard a scream.

They decided to put a radio collar on a kangaroo because the kangaroo preserve is where they are reported around and a potential ongoing source of protein. Bobo thought he heard someone talking on the night investigation tracking the kangaroo.  He said it was a language he hadn't heard before and not aboriginal.

It was good to see them looking for another BF relative in a really different location, but I admit that for a 2-hour special, I would have rather heard more witness reports and less of Matt feeding a bird meat, watching rugby, and playing on the beach. Witness reports are those moments when you want to turn down the lights and get creeped out. 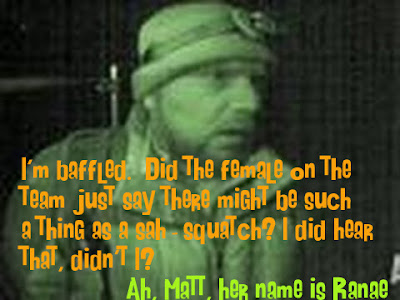