Why I Started Ghost Hunting 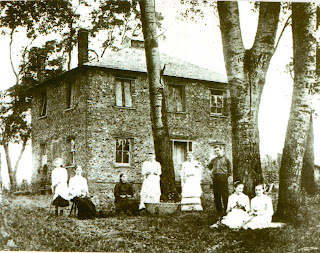 Sure, I grew up in a notoriously haunted house that was used as a Civil War hospital for the North and late for the South (photo above from the 1860s following the war when the family reclaimed the estate). I witnessed a lot of phenomena, much of it I assumed as a kid growing up was perfectly normal. Some of it, like poltergeist activity, made me wonder how in the hell such a thing could occur. One time, when I was 10 years old, I stole my father's tape recorder he practiced his speeches on and sat on the stairs all night waiting for those booted footsteps and I captured them on tape only to have the sounds shot down by others saying I simply wore my father's boots and recorded it.

I realized at a young age, you cannot disprove a haunting, but you also can't prove it!

Jump ahead a few decades, living in a modern and not-haunted home, I had left the ghosts behind me, right?

It all changed when my ex (whom I was married to at the time) was asked to a work friend's girlfriend's housewarming party. He wanted to go so he could play drums during the open mic all evening. I went along, but wasn't thrilled. I hated attending parties of people I didn't know, but luckily a few people I knew showed up. I hadn't known it, but the hostess had just bought the home and was having some "haunting" issues. She told someone and that person told her that I was a psychic.

The woman eagerly grabbed me up and along with her friend, she took me aside and told me of hearing someone in the hallway and a woman crying in the master bath. I did my walk through, touching the place, envisioning another family that had lived there. I told her what I found as I walked but told her not to respond.

I don't like feedback or it distracts me down the wrong path.

I told her about an elderly woman in the first bedroom who was a bit demented in an OCD way and would walk the hall and recheck and recheck the front door several times each night. There was a corner bedroom I didn't like at all. A man did something in there that was shady. The master suite, I saw a man, a woman and about an 5-year-old boy who slept between them, partly to protect his mother from his father and partly to feel safer by being near his mom for protection. In the master shower, a woman sat on the tile floor, bleeding into the drain from her arm.

The friend with the homeowner shook her head in shock. She had lived next door for 25 years. Yes, there was a man, woman, and a boy living there with the grandmother. She was a demented old lady and did sleep in that bedroom. The man sold drugs from the house and the corner room was where he ran his business. The woman did try to kill herself.

Feeling the usual relief that I had followed the right trace of residual information, I was ready to rejoin the party when the neighbor said, "I just don't understand it. They're not ghosts. They live across town. All of them are still alive."

My world tilted on its axis. As a child, I had a sense of residual energy (scenes replaying mindlessly in a space) but having read what haunted this woman's house and realizing that there were no actual ghosts, I wanted answers. Were all hauntings residual?

So, I began avidly ghost hunting in search of answers. Every hunter has different influences but mine were based on an inability to accept blindly and with religious faith the explanations for what a ghost is and how it works. I started this blog several years ago which was several years into my hunting and the premise was to explore theories, test them, search for testing methods, trying to get some answers.

I still search, still theorize, still experiment and hope to have more "aha!" moments where it all makes sense. Right now, it's a marvelous and interesting mystery and I am ever a curious child.