Why "Finding Bigfoot" Works For Viewers 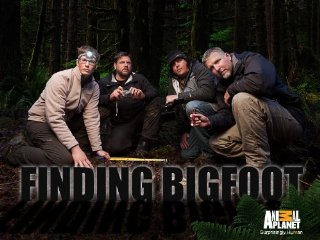 This picture (above) is why "F'ing Bigfoot" works. A team of 4 characters; a skeptical scientist, a life-long BF hunter, BF's best future buddy, and a child-like enthusiast who wonders at nature.

I hear people bellyache about the show, "it's not real Bigfoot hunting," "I can't believe they thought that was a squatch," "that witness was totally bogus."

Here's what those viewers need to know: This is a show. A show is a way to present information in a way that is expedient and entertaining. We wouldn't watch grass grow on TV. We would not expect a cure for cancer while filming a lab.

Let's use the musical as an example....

We don't believe that people break out into song while chopping wood. That's preposterous and it loses credibility if we take it literally. It's actually representing the process going on in the character's psyches and emotions for us to get inside their heads.

F'ing Bigfoot represents the process of Bigfoot hunting. They are not likely to yield actual groundbreaking results. They are filming a show in the woods with a crew and hitting it in different states over short periods of time. Most BF hunters are in their own state, know their territory, watch it for years on end.

When F'ing Bigfoot hits the ground running with crew in tow, they are there to represent the field researchers, to show us the interviews with witnesses, to go into the woods and show us what a hunt is like.

The show serves its purpose brilliantly and most especially because the team of 4 quite individual enthusiasts. We come to care for the characters as much as their incredible journeys.

F'ing Bigfoot works. And, I hope it works for a helluva lot more seasons. If you can't tote your ass out into the woods to hunt--enjoy the show on Sunday nights on Animal Planet.
You can join me in my Sunday night "squatch" drinking game and take a sip of beer for every "squatch" spoken--if you dare. I will be live blogging again on Bigfoot Evidence, making my MST3000 commentary on this team that I so adore.