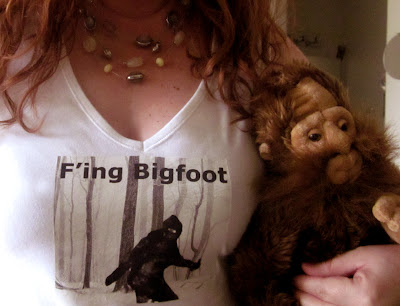 This episode of F'ing Bigfoot was in Ohio. I have to admit to being skeptical about BF activity in the Ohio area. I suppose closer to WV, it could be possible. I absolutely believe it exists in WV, where I had an amazing encounter at nighttime in 2005 at a protected area where hunters weren't allowed and wildlife was so plentiful, it was like the Garden of Eden, as well the entire landscape riddled with more caves than anyone could explore in a lifetime. If Ohio has similar conditions, I could see it being possible. I just think population density around there would make a state park a very small habitat for breeding.

Luckily on the squatch count, this episode was strangely less "squatch" and much much more "Bigfoot." glad I don't take a drink for every BF or squatch. I'd have to call into work the next day. Squatch count was 33.

It wasn't a horribly eventful episode, but I love to see how they tackle each situation. What I appreciate so much about the team is that they aren't like TAPS on ghost hunts. There is no routine. They bring in new techniques, new ways of tackling each case depending on the witness statements.

Man, I love this show! Animal Planet, please pick it up for another few seasons right away! Best things on the episode: Stover's eyewitness description of BF was chillingly real, totally authentic. I like that they are willing to let one guy remain and campout (well, not totally alone, there's a crew there), but the concept is a cool one. With 4 people, tons of land to cover and witnesses to interview, it's not an easy task. I like that they're willing to try new techniques and mix it up. Good for them! Not on my top favorite episodes because I never had a "that was a squatch" feeling moment, but hey I get to see my favorite 4 hit the woods and say squatch way too much.

Be sure to check out Cliff's blog where he will be sharing the insights about the show that you didn't get in the episode--this guy is awesome for doing this!  Read the live blogging I did (my smartass commentary) on Bigfoot Evidence.