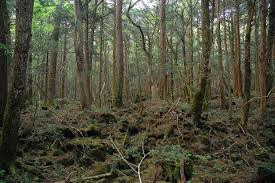 This dense forest at the base of Mt. Fuji in Japan is one of the world's top suicide locations. the culture in Japan would seem to like to hide their identity and shame from their families, so the youth take to the woods, destroy their ID and leave themselves to become one with nature again. The question is, what does this do for haunting? Knowing it's on an active volcanic site and carries so much bloodshed, it would seem that Aokigahara Forest (aka "Suicide Forest") would be highly haunted, especially given some very spiritual moments before the death which seems to allow a tie to be made with this natural setting.

"Suicide Forest" gave "Destination Truth" one of their creepiest episodes. In the episode, they got lost, ran into a group of youths looking for grizzly scenes, found an abandoned camping site with some creepy leftovers including destroyed photos, and captured something on film that looked like a misty figure coming out of the ground.


"Suicide Forest" was a movie about the forest. It could have been so much better, but the plot got messed up. Still, it has some creepy moments.