on October 27, 2011
I went to an interesting paranormal lecture recently entitled "As the Spirits Move Us: Science and Speculation of the Paranormal" and the beautiful Herberger Theater in Phoenix. Following the lecture by two top paranormal investigators/parapsychologists, we attended a dessert social where we could speak more intimately with them about the subjects they discussed. The speakers were Loyd Auerbach and Barry Taff.

Chances are, you've seen Loyd on paranormal specials and interviews. 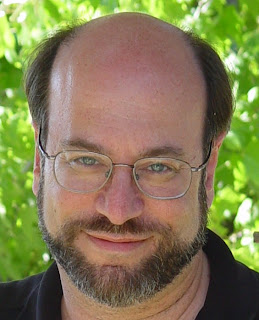 Look familiar? Well, he was a most engaging public speaker, reminding me a lot of Josh Gates with a quick wit, quick mind, and quite comfortable in his own skin. He studied magic and does a very impressive mentalist routine with audience members. But, it's his interesting cases that really caught my attention including a funny one involving a yuppie couple who left a lovemaking residual tract down in their old bedroom for the new owners to deal with.

Barry Taff, you might recall as one of the investigators on the original Entity case. He has experienced 43 years in the business with more poltergeist activity witnessed than any one human being could have. He has his doctorate in psychophysiology and this should not surprise us because his take on ghostly activity is very much in line with mine; involving the right set of geomagnetic conditions (magma chambers, geology, seismology, underground springs, high tension wires, and people with the right physiology to actually measure on a magnetometer.

Interestingly, he discussed something that had me thinking. He mentioned that if people see an apparition, it doesn't mean that it's necessarily in a visual form in the environment, but is an image placed directly to the minds of those in the room. Sometimes, they even see something different than each other. It made me think about EVPs and how voices imprint on audio without being audible. So, perhaps phenomena is not actually in the environment, but taking a direct path to the mind or recording device which is something I've debated about a long time.

They also discussed poltergeists being associated with the living, which I am absolutely in line with. Residual is another issue that can be left behind by the living from actions they took in that environment. Some people with issues involving residual can get by changing the environment with new memories by taking over the space and laying down new patterns. As well, when dealing with ghosts, one can simply ask who the ghost is and what they want. Sometimes, it's as simple as wanting to be recognized. They can also do things that make it uncomfortable for a ghost. Loyd humorously spoke of a case where the young son got a book of jokes and couldn't stop telling the corny jokes. They ended up having him read them for an hour and told the ghost, the kid will continue to do this if didn't go elsewhere. Even the threat of country music to a dead rap star's home could make it unwelcome there. These were humorous and yet very practical ideas.

Taff spoke of a confluence that involves poltergeist activity containing these 3 elements; Location, neurophysiology, and emotions. I am completely aligned with that assumption. It's something I've believed since I was a child.

In an interesting mention, they spoke of static electricity being present and helping the whole process and if one were to wave around a fluorescent light tube in a static-ridden atmosphere, it would light and that would show potential conditions.

Both men suggest the use of a wide variety of instruments, but stress the need for very expert level (expensive) instruments and the knowledge of how to use them and what they mean.

I enjoyed the lecture very much and found the Herberger Theater to be a fantastic place to view a lecture and enjoy fine art on the walls of the lobby and stair wells. It was a very enchanting evening. The links to the speakers' names above link you to the books of theirs that I recommend.