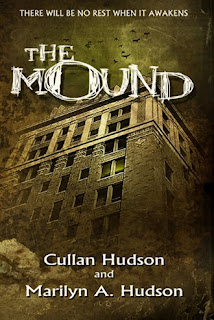 A talented blogger, Cullan Hudson, whom I have admired for a long time has just jumped from the nonfiction genre to fiction with Marilyn A. Hudson. I consider him to be the dude version of me in the blog world so far as being a writer, logic-minded, curious, into all things paranormal, urban exploration, history, Native American culture, ghost hunting, and having a wicked sense of humor. If you haven't read Cullan's Strange State blog, please do! I seriously don't miss a single post-ever! There are a handful of blogs that do that to me and his is one of them. I feel like I've missed all the daily news if I don't go there because he covers all the odd things in the paranormal world you didn't know about and make you go, "hmm...."

Cullan let me read his newly released horror novel "The Mound" before its publication and I not only gave it two thumbs up, but two big toes up too! (I ran out of appendages, what can I say?) He put so many elements into one fast-paced novel that I am humbled by his ability to see the whole scenario play out. This fantastic book includes a psychic, a ghost hunting team, Native American culture, monsters, the egos of movers and shakers, and destiny.

If there's one thing I absolutely know, this horror novel is ideal for my readers, it just your cup of tea! If you read just one horror novel about ghosts this year, this is the one. 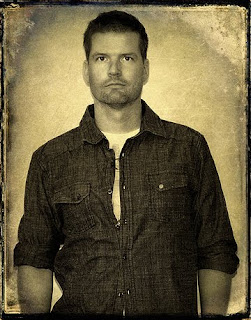 Here's an interview I did with Cullan so you can get to know this brilliant guy on a more intimate level as it pertains to his writing:

Autumnforest: Writers write about things they know, like Stephen King uses the backdrop of Maine for his work. What in your book "The Mound" is from your own life experiences?

Cullan: Aside from calling upon years of experience traipsing through abandoned buildings to flesh out the locality details, I've incorporated elements I've gathered from first hand experience with paranormal investigations and setting it all in a place that is very familiar: Oklahoma.

Autumnforest: "The Mound" includes archaeology, modern ghost hunting, Native American folklore and psychic skills in one book; are these personal interests of yours?

Cullan: We both share these interests, in truth. When I was younger, I always wanted to be an archaelogist. I still love it. Not in that Indiana Jones way (although he rocks), but in a very real sense as well. I'm always watching documentaries and reading--and not just any old books about the subject, but often textbooks. I think there is also a rich lore of Native American tales to draw upon, and in this novel (not to give anything away) we kind of tease the reader with this before delivering a surprise. And the very real possibility of psychic power intrigues me, in the fringe science way. In fact, two of the characters in the story are psychics that represent the dichotomy of the phenomena: the celebrity seeking charlatans and the quieter types that don't quite understand their gift, and don't feel the need to "prove" it. Those types that tend to avoid making spectacles of themselves.

Autumnforest: Your characters are extremely well fleshed out, is there a bit of real-life people assembled in these quirky and interesting folks?

Cullan: To a degree, I think any writer informs their creations with the people and places around them. Write what you know, as they say. In the case of The Mound, there is no specific character modeled after a single person; however, many of them contain elements of people I've met or are well-known. For instance, the older of the two psychic women is part Sylvia Browne, part this woman I met on a ghost hunt--all wrapped up in a package borrowed heavily from Barbara Michaels.

Autumnforest: Now that you've written "The Mound," can we expect more horror fiction from you? What's in the pipeline next?

Cullan: I do plan to launch a sequel to Strange State in 2012 and possibly I'll get around to finally writing what my research revealed after living for three years in Puerto Rico. I will continue to share nonfiction paranormal accounts on Strange State, but it may be a while before I produce another book like that, simply because I wanted to write about something that hadn't been well covered before. After that, I likely see myself venturing more into fiction. I've got a collection of short horror based on the theme of the southwest called Dark West. That should be out in 2012, too. And there will be other novels set in the same world as The Mound that will feature some of the same characters. We've plotted out another three or four, following the story arc of one particular character.

**Tonight is Lonely on a Friday Night. Join me here**