"Hunt For the Skinwalker" Reviewed 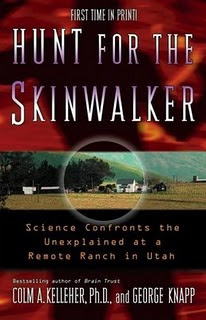 “Hunt for the Skywalker,” by Colm A. Kelleher, PhD and George Knapp.

Every paranormal researcher has a few "pet" projects that are so intriguing to them that they study new information every time they can. The concept of portals is one of my favorite such subjects. Portals show themselves in clusters of UFOs, Bigfoot, Dog Man, spirit lights, and such in one area where it seems as though there is a time-limited arrival of weird shit only to have it just vacate one day and be gone. One such portal was believed to be centered in NE Utah. It is, perhaps, one of the most publicized and talked about portals: Skinwalker Ranch.

I don't take the reported stories as true fact, but more as "what if" conjecture. I went into it hoping to find a story that rings true and instead found my very favorite nonfiction horror (nonfiction being debatable) of all time! I'm not kidding when I say that if you read this at night, you may have trouble sleeping and if you read it in a cabin in the woods, you are likely to be with the lights on all night long.

When I say this is my favorite nonfiction horror book, I'm not kidding. I think I'd nudge it over to the fiction aisle and give it the same rating. It sang to me in a "Blair Witch Project" pseudo-reality kind of way with disturbing elements I had never seen thrown into one pot together.

Read it. Keep it. And, I dare you to keep the lights out!