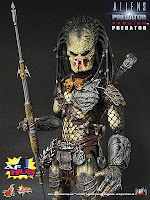 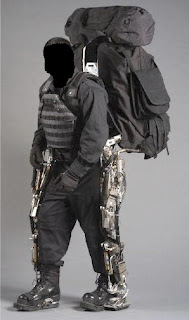 You know I love conjecture. I’ve talked about whether there could be zombies or vampires or werewolves, so why not the Predator from the movies?

Invisibility cloak: This is the most important aspect of the Predator. He needs to be able to hunt without detection. In the movie, the creature can turn his cloaking ability off. This is not only possible but should be out for use by 2011! Original designs had a costume with tons of little squares on it that worked like television screens. A camera attached to the backside of your outfit interprets what’s behind you and shows it on the little screens so people don’t necessarily see you, but see images of what should be there if you weren’t there.. Make sense? From How Stuff Works: “However, another team is working on a cloak that because of its weight and thickness and being made of metamaterials that don’t absorb or refract light, it will redirect it. Currently, the team is only capable of working with wavelengths larger than light. They have the statistics to prove that invisibility is possible, but at the moment, it's still theoretical.”

How about the exoskeleton with its neat gadgets and protection? Yup, we can do it! From tacticalwarfightergear“The history of exploration and development of bionic external skeletal structures goes back nearly fifty years. New emerging designs for warfighters are patterned after these early Hardiman models. Overview objectives for this project boil down to several main points with several critical sub-functions attached. • Feature: Bulletproof Ballistic Protection. • Function: Hydraulic Assisted Bionic Enhance • Nanotechnology enhanced Bio-Med Sensors. • Compact Silent Renewable Powered Energy. • Internal Personal Portable Cooling system.” (Photo above) (Tell me if this ad for it doesn't sound like something from "Terminator"): What the exoskeleton program at DARPA plans to do is turn ordinary soldiers into super-troops who can leap tall objects and run at high speeds. This program is progressing through beta testing with promising results. DARPA has set specifications for exoskeletory machines. Here's what researchers are demanding from exoskeletonizing humans with machines:
• Increased strength - Soldiers must be able to carry more weapons and supplies. With increased strength, exoskeletonsoldiers must also be able to remove large obstacles from their path while marching. • Increased speed - Average humans walk 4 to 6 mph, but special operations soldiers are often expected to carry up to 150 pounds of supplies in their backpacks. Most of today's troops cannot go fast enough carrying this much weight and armor on their backs when fighting with aloof fleet-footed enemies burdened only by AK-47s and RPGs. These units will need to advance until they can deliver speeds faster than 15-20 mph. • Jumping and Leaping Capabilities – Mechanical suited exoskeleton soldiers must be able to leap over obstacles such as vehicles and small buildings obstructing their mission. Soldiers will benefit from increased endurance when marching long distances over unpredictable terrain. With increased strength, they will also be able to repair heavy equipment that would otherwise be impossible to repair. Experts expect fewer casualties because of increased body armor.

The ultrasonic sensor that traces a ricochet to find out its origin point. Possible! Of course, whether the military will talk about it, who knows…

Now, if you recall the Predator had the ability to fix himself up—he was biological beneath the suit of armor. He carried his own cautery kit which would be feasible to seal an injury closed. This is much like those old-fashioned techniques of heating up a knife blade and applying it to seal a cut closed. Portable cautery kits are available.

In the future might man go to other planets geared out like the Predator? Oh yeah, certainly could. Would we, however attach mini rocket launchers to our suits and collect skulls? I hope not, but you never know what space might do to men in a dream hunting suit.