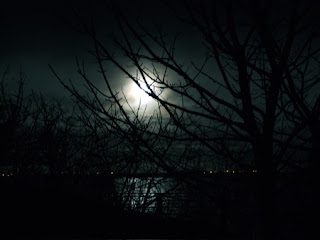 Skinwalker: (Wikipedia) is a person with the supernatural ability to turn into any animal he or she desires. Similar lore can be found in cultures throughout the world and is often referred to as shapeshifting by anthropologists.

Shadow person/animal: (Wikipedia) Are supernatural shadow-like figures of both modern folklore and paranormal popular culture that believers claim appear as dark humanoid (or animal) forms or evasive specters seen mostly in peripheral vision.
My ghost hunting partner, Ginny, and her significant other, David, had an experience that so impressed me by their story, that I sat them down to get the details. This time I took notes instead of curling up with my feet tucked under me being spooked by the description. I thought I’d share it with ya’all because, as debunkers, my ghost hunting partner and I both are left puzzled by this encounter. Here is their story:

It was July 2006. The couple was leaving the Grand Canyon Park to head south towards Williams for their hotel room. They were driving in a car, heading out the park entrance around 9:30 p.m. They were less than a mile from the park on this unusually chilly night. In front of them was an SUV perhaps 8 car lengths ahead. They saw the brake lights go off on the SUV and Ginny warned David, who was driving. They both noted the SUV swerve into the oncoming lane as if something were in the roadway. Ginny witnessed something very huge and black, taller than the SUV, its shoulder area seeming to be about even with the top of the SUV. They had only a couple seconds before they came up on the spot themselves. David swerved the car into the oncoming lane as he witnessed this huge black creature threateningly close to the car. As he did this, Ginny in the passenger side looked up to this gigantic black mass. Its head was well above the height of the car and she caught its eyes as they passed by it. Her immediate reaction was one of impending doom and threat. She felt its massive size and power and felt completely inadequate in their car in comparison.

David slowed down, thinking of turning around, when he looked into the rear view mirror and saw the car behind him swerving the same way in the road, just missing this huge black…creature. Oddly, the lights of that car could create no detail on this black mass either.

It wasn’t until Ginny was describing the story to me that I realized some strange features. One was the SUV in front of them slammed on their brakes. Had those people seen this thing in their headlights in the distance, they would have braked slower. They didn’t see it, even with headlights, until they were upon it. Ginny described a steep embankment near the roadway that seemed to have entrapped this thing, forcing it to follow the road to get out. At least, that was the sense of the situation. Also, their own headlights showed nothing more than a black mass. No color, no detail, no definition. Given that it was threatening their place in their lane, this creature should have been seen, as the elk had been seen by the headlights. As well, the size was exceptional. If a typical SUV is perhaps 6’ tall and the slope of what seemed to be shoulders was even with it, then that would make this creature perhaps over 7’ high! Ginny commented several times about how massive and threatening it seemed.

While investigating this encounter, I’ve come across some other very creepy and amazing stories from the Grand Canyon that will be coming in subsequent posts. Apparently, the supernatural and unexplained is very common there. In fact, perhaps one of these upcoming posts will tie into this story!