The Flying Dutchman: Harbinger of Doom 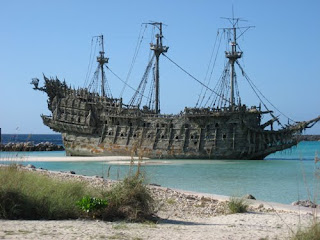 (above, from the opera “Flying Dutchman”)

The “Flying Dutchman” is a legend of a ship that was doomed to never go home and for all eternity sails the ocean. It supposedly glows ghostly at night and when seen is a portent of doom. The story comes from a legend that in the 1600s a Dutch ship was heading around the Cape of Good Hope and the captain made them sail on through a horrible storm. The men were washed overboard and the captain was cursed to sail the sea around there for all eternity.

The first reference to the legend was from as far back as 1795 in the book “Voyage to Botany Bay.” One 1880 supposed sighting was described this way, "At 4 a.m. the Flying Dutchman crossed our bows. A strange red light as of a phantom ship all aglow, in the midst of which light the masts, spars, and sails of a brig 200 yards distant stood out in strong relief as she came up on the port bow, where also the officer of the watch from the bridge clearly saw her, as did the quarterdeck midshipman, who was sent forward at once to the forecastle; but on arriving there was no vestige nor any sign whatever of any material ship was to be seen either near or right away to the horizon, the night being clear and the sea calm. Thirteen persons altogether saw her...At 10.45 a.m. the ordinary seaman who had this morning reported the Flying Dutchman fell from the foretopmast crosstrees on to the topgallant forecastle and was smashed to atoms.”

Modern day theory says the ghost ship is nothing more than an optical illusion. Apparently, modern day mariners are used to the sight of hazy-looking ships appearing over the horizon; they are simply mirages caused by the refraction of light rays. Sailors had many superstitions. Imagine the vulnerability of being at sea? They developed such beliefs as having a woman on board was bad luck and “red sky in morning, sailor take warning; red sky at night, sailor’s delight.” Surely the sight of strange things when at sea such as mirages and St. Elmo’s fire were enough to make anyone edgy.

Personally, I like the romantic notion of an abandoned ship and the “Flying Dutchman” was one of my very favorites as a kid. I remember us going out on our cabin cruiser at our summer place and puttering around the Mobjack Bay just hoping to catch a glimpse of it. There’s something very primordial similar in humans that when we’re at sea we look as far in the distance as we can as if searching for familiar landforms. When you’re away long enough, I suppose you just hope to see another ship.

As far as movies that use the concept, there have been some awful ones and some fairly good ones. Usually, I put up with the movie to get to the part where they show the ship. The way I see it in my mind, it has tattered sails and creaking decks. In fact, I was so consumed by the Flying Dutchman that I even did my master bath in that theme at one point with tattered sails billowing across the ceiling, portholes, and netting with sea shells and fake kelp. (Yeah, if I could, I’d live in a house where every room is a different movie set. I’m that kind of geek). If you’re looking for chilling portrayals to get you in the mood, most pirate movies are mildly satisfying, but the one in “Pirates of the Caribbean” was impressive. Personally, I liked the portrayal in the remake of “The Fog,” as the best feel and look.
at 6:20:00 AM