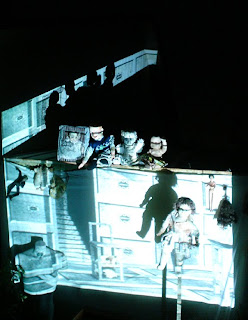 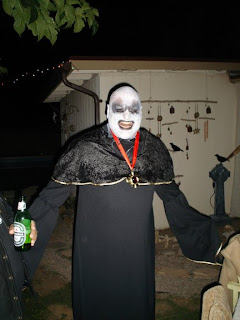 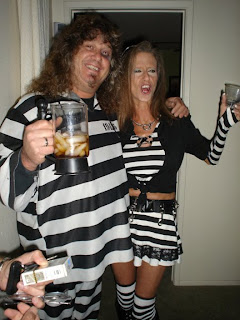 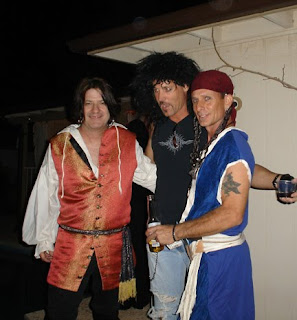 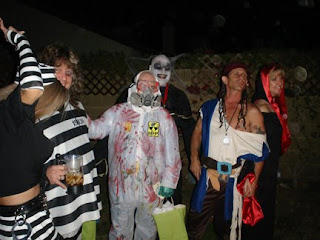 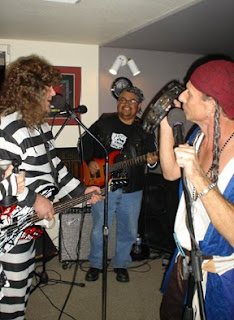 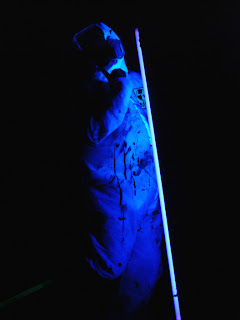 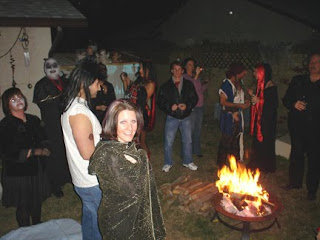 Well, I'm barely starting to skim over the pictures. Exhausted beyond belief and complete contentment. It was the best party I've ever been to and that says a lot because I've been to a huge variety. There were easily 50 people or more at any one time and it was total insanity but it flowed really nicely and the way I set it up just worked perfectly. I can't wait to see the video. My son decided to call it "Tamborine Pirate." I think the video and pictures will explain that.

One picture shows the prize winners. The prisoners won "best couple," the toxic waste dude won "most authentic to the party theme," the Fester-looking dude won "scariest costume," the woman in the black and red gown won "sexiest costume," and the pirate won "best overall costume."

You can see how the movie in the one picture goes onto the dolls and then a strip of it goes up the side if the house showing the outlines of the dolls. That was an enormous hit. People gathered around the bonfire to watch it.

The musicians went in and did an open jam which was hilarious. There were some that had been in bands with my hubby (drummer in a band/engineer at Fender Musical Instruments) and others who hadn't played in years. It was pretty funny. They did manage to crank out some good tunes and then they sort of dinked around for a while.

My neighbors were being very patient with the music, but they usually like when hubby's band practices. It is a specially sound-treated room but the doors were left open so we could watch and enjoy the show.

I got a picture of some of the crowd when the band was playing and the ones who wanted to watch the band were crowding around the drum room.

I love the picture of the toxic waste guy next to the black light.

My costume was a Celtic Druid, so I had opened up the sleeves and took a twisted autumn vine and wove it in and out of the open sleeves' edges. I had leaves on the hem of my gown and my pentacle around my neck. I had totally rigged the thing last minute and had no idea if it would work. What relief. It seemed to go over well. I felt very much myself as if I were at the party dressed as how I feel inside. I will have to get a picture up as soon as I get to those.

My son and his girlfriend are zombie cowboy and zombie bride. Wicked!

The picture of the two pirates and the rocker in between (the rocker is my hubby).

Everyone has been so supportive that I just had to post some pic's right away. I'll keep you updated as I acquire photos from other people. It was like the paparazzi last night. Everyone was taking tons and tons of pictures. They had fantastic time. It was so exciting to put on a party that's the kind people talk about for years and remember the best Halloween party they went to! I'll post more pic's of the weird costumes later.