Is the Sphinx About to Reveal its Secrets? 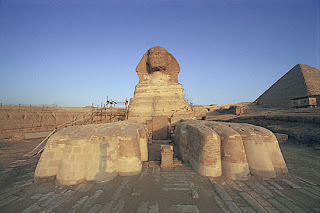 I came across this article and it got my interest. It said, “An enormous system of caves, chambers and tunnels lies hidden beneath the Pyramids of Giza, according to a British explorer who claims to have found the lost underworld of the pharaohs.
Populated by bats and venomous spiders, the underground complex was found in the limestone bedrock beneath the pyramid field at Giza.”

I remember hearing Edgar Cayce “the sleeping prophet” mentioning that records of the ancients would be found in three places; Bimini, Yucatan, and under the Sphinx.

This other article helps to shed some light on what Cayce had predicted, that the records of Atlantis would be found in a chamber beneath the Sphinx’s paws.

Does this finding perhaps correlate? And just how long will it take Egypt to let this cave system be explored? I suppose that will be the factor in finding out of Cayce was onto something. I, for one, will be studying it closely.