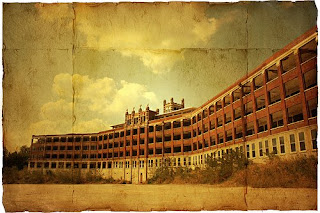 Waverly Hills Sanitorium in Louisville, Kentucky is the focus for my research on the haunted formula. If you recall, TAPS "Ghost Hunters" show went there and did an episode in which Jason and Grant caught something crossing the hallways on the Flir. The thing was 3-1/2 to 4-feet tall. Construction began on the building in 1908. Due to expanding numbers of tuberculosis patients and no antibiotics invented yet, the building was enlarged by 1926 to accommodate a massive amount of patients. Until 1926 it handled tuberculosis patients who died by the thousands (estimated at 63,000!). It reopened as a medical center and then later a geriatrics center until 1980 when it closed forever. It is most notable for the "death chute," a hallway designed to carry the bodies out past the patient's viewing eyes.

I don't think there's many places with such an amazing location, construction, and death toll and suffering. This scored a 6/6, but I'd put it on the tipping the scales end of it.

Growing up in a Civil War field hospital, I believe that the more anguish, pain, and drawn out the deaths of the people are, the more they seem to leave behind like residue in the environment. It might be that in the right conditions, we pick up on the emotions contained within and hence a haunting begins by our own activation. It's an intriguing thought, but one worth considering. I know as a child there were certain parts of the house I never lingered in ever! They had distinctly bad feelings including the spots on the floor where the bloodstains remained. I wouldn't even sit on that end of the sofa on a bet!

You have to ask yourself sometimes about human nature. We inherently know things. Like, on a whim, I decided to put glow in the dark star stickers on my ceiling in my bedroom so at night it would be like I'm falling asleep under the stars. It was very pretty, but also very unsettling. I was looking at a foreign random sky. It's funny, but the eyes pick out patterns and, even though I only know the Big dipper and North Star, my senses told me my ceiling was all wrong. I believe inherently we know other things, like why the hills of Kentucky, the lowlands of New Orleans and the beautiful City of Savannah, to us are equated with hauntings. It isn't just legends and history. If that were true, then the Alamo would be considered very ghostly, but somehow humans know that there are conditions for a haunting. That's what I hope to learn more about in my continued research.