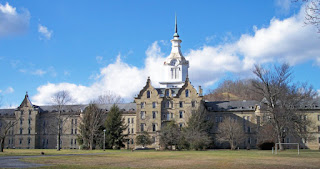 Wow! It's serendipitious. I was looking for a new place to put on the list of 50 I'm researching because one site didn't have a building on it. So, I opened up a blog update for Zak Bagans on my MySpace and voila! "Ghost Adventures" is going to Trans-Allegheny Lunatic Asylum in Weston, WV for a 7-hour Halloween special on October 30th. It made me recall the place, as we drove past it a few times when I was a kid and I remember getting a bit hysterical when I saw it as if I recognized it somehow and what it was used for. It's been in the back of my mind for a long time and seeing that name again made me go--hey! Use it on the list! I just remember getting a sense from it that it was like a super battery for the paranormal. After objectively grading it, I realize it is!

The Trans-Allegheny Lunatic Asylum was built in the mid 1800s. The Civil War interrupted the process, but later they finished it and opened it for mentally ill patients. Conditions over time became quite horrible and it closed down, but in its heydey there where awful lobotomies done and electroshock therapy, thousands died and were buried on the grounds! To top it off, the building is one of the largest free-standing hard-cut stone masonry buildings in the US! Like a superconductor when you consider the other features on its grading:

1. The land is fantastic--limestone, shale, coal, and sandstone (Pennsylvanian period which I find seems to be highly haunted ground).
2. There is a river very nearby.
3. There is a train track very nearby.
4. The building is made of hard-cut stone.
5. It is older than 50 years.
6. It has seen thousands of deaths.

To give it even more super power--it has a cemetery of its own dead on the grounds--can you get more disturbed than that???

This is high on my list of places I'd like to experience. TAPS on the "Ghost Hunter" show did an episode there (if you recall, they wore asbestos masks). They saw lights, heard footsteps, a woman laughing, a child laughing between Jason and Grant, and Grant saw a man in a white hospital outfit duck down, pull his hands over his head, and get sucked out of the room! That was a pretty exciting episode.

Once I find the hard evidence of haunting on this place during my second wave of research, I have a feeling this might be one of the most super haunted places in the US.