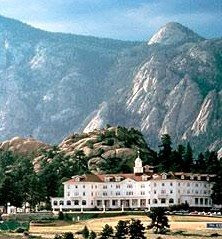 If you're not already a fan of "Ghost Hunters," you might have heard about The Stanley Hotel in Colorado, as it was the hotel that apparently inspired Stephen King's novel "The Shining." TAPS made it popular by having some very successful hunts there and an all-night live Halloween episode. What impressed me the most about it was the sounds of voices in the basement and the glass breaking and closet door opening and rattling in the room that Jason stayed in. That was probably one of the most impressive episodes ever.

This grand hotel, built by the man of famous "Stanley Steamer" fame, is on a fantastic piece of land--lots of granite!

Here's how this one broke down. Although it got a 4/6, when I finish my research, I might need to adjust this for certain conditions that make it more like a 5/6. This case might be on that proves that you don't necessarily need death on a site for a haunting, but could use the right conditions to make it a receptive site for haunting phenomenon.

There are no train tracks around the area and there are no deaths associated with it, although there is some question of a homeless woman dying in one of the buildings. The lore of the hotel is that people once associated with it now haunt it. I've always had some question about spirits haunting places they loved in life rather than ones associated with the moment of passing, but with these kind of conditions and no real death/trauma associated with the site but it obviously having issues, I'd almost believe it's possible, but so far I haven't seen much that isn't along the lines of poltergeist activity or strange natural phenomenon rather than a true haunting. When I begin the second phase of my research into the actual hard proof of hauntings collected by others, then I can probably make an observation about just what kind of haunting is occurring here.

Perhaps it's true, if you build it, they will come.