Sedona - It Reboots Your Soul 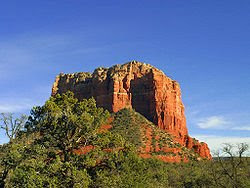 Note: Sedona requires parking passes nowadays. It’s not like the good old days when you could just stop alongside the road and photograph the monolithic rock structures. You can acquire them at the visitor’s center in uptown Sedona (where all the main shops are on 89A). They go for $5 for one day or $15 for 7 days, and $20 for a year.

Three-hundred-and-twenty-million years ago, Sedona was underwater. The first layer of Sedona’s rock was formed by seashells and sea creatures. Later, rivers left red sediment from sandstone. The sandstone contained iron which when mixed with water causes the beautiful “rust stains” associated with the rock of Sedona. The beautiful features we have come to know as “Coffee Pot Rock” and “Bell Rock” and others are capped with erosion-resistant limestone. The fissures and creeks were created during the forming of the Grand Canyon. It was as if there was a symphony in tectonics to create this beautiful paradise that Arizonans are very proud to possess.

It’s impossible to think of the Red Rock City without mentioning the vortexes. What is a vortex? A swirling of air (like tornadoes and dust devils) or water (like whirlpools), or in Sedona’s case, swirling spiritual energy. This is supposedly where Earth’s energy ley lines intersect. These certain locations in Sedona are associated with spiritual meditation, healing, and prayer.

Apparently, the energy from the vortex interacts with the person’s own energy, so the experience is very different for each individual depending upon what their substance is inside. It is also associated with enhancing psychic abilities. As someone who has gone there numerous times and explored the vortexes, I have to admit there seems to be something to it.

I watched a documentary one time where they took a professional with instruments to measure the ground’s magnetic energy and found great changes in those areas he couldn’t explain. However, with a high concentration or iron in the soil, I’m thinking that might be contributing. It could also perhaps on a smaller level affect a human body’s own magnetism. That’s only speculation, but anyone who’s been there will tell you that the minute you roll into Sedona you feel very odd--not your usual self.

Usually, when I arrive, I get a headache the first 24 hours and then I feel super energized and almost amnesic of who I was before. That sounds kind of strange, but it’s like all the bullshit that follows you and nags at your internal dialogue all day, is silenced. You can finally hear the REAL you inside and not the fears, anxieties, and hurt. When I make prayers on leaves and toss them into the Oak Creek, they come true. When I go to the vortexes, I feel as if there’s this strange spiritual music in my head. Every little thing I ever worry about and all responsibilities seem to lose importance. I stand there and feel strangely like a blank slate waiting to be filled. It’s as close to meeting the genuine you at your core than you will ever experience. I think the only thing closer than this might be an out of body experience. We had a friend who committed suicide and we put him to rest in a vortex, scattering his ashes. I wonder sometimes if we put him to rest or kept him alive…

Personally, I like going there at least once a year and just kind of “reboot” my energy at the airport mesa—for some reason that location just does it for me. I must say, it has wonderful views too. Most times when I hike in there, I find a medicine wheel someone has placed on the ground. This is a formation of rocks in a circle with spokes coming from the center. Basically, this is a practice to supposedly draw energy into the wheel where you can stand or sit and gather it while being protected. When you go inside of one, admittedly, you get a strange opening of your mind so that you can see the bigger picture. It’s quite rapturous and whenever I find one, I just have to step inside. It’s a weird feeling of being completely one with the planet and everything on it and part of something greater. I hold onto that place inside of me long after I leave Sedona.

Sometimes when you approach a vortex, you’ll see a stone where people have laid things out. The first time I saw this, I had no idea what was going on. There were buttons, coins, rocks, gemstones, feathers… They’re offerings. It’s very common to leave something as a gift for the experience of being there and most folks choose something of spiritual value rather than monetary worth. One time, I had nothing with me, so I tied some of my hairs to a red rock and left it there. I thought in a symbolic way, it bound me to Sedona.

You really have to take your skepticism and acerbic humor and leave them at the door when you go to Sedona. This place is also known as a huge UFO capital, there’s even a UFO café! You’ll see tons and tons of spiritual items for sale in the numerous shops, lots of flute-playing New Age music, the scent of incense, labyrinths cut into the ground for spiritual focus. You can get aura photos taken, get guided tours of the vortexes, go on UFO hunting trips, and jeep rides into the red rock, as well as drum circles. If you want a psychic—there’s more per square mile here than anywhere. There are tons of gorgeous art galleries. It’s truly a shopper’s dreamland. If you want to play in the creek and rent a cabin, you can do that, drive up the Mogollon Rim above the creek and you come to a gorgeous lookout point that is mind blowing and usually attended to by Native Americans selling the most beautiful jewelry imaginable. You can perform yoga with groups atop of red rocks. The list is endless and always changing in this artist’s colony town.

Some of the shortcomings of Sedona? Traffic. Parking is a bitch. Cars ball up in the main street area, so be patient or walk. They roll up the sidewalks there early. My friends and I like to go up each autumn for a girl’s weekend of laughter and bawdy jokes and aura photos and vortex pilgrimages, but we also enjoy a late night supper and drinks, but we get kicked out of most places around 10 pm.

I would love for everyone to have the opportunity to visit Sedona. It becomes this place in your mind you go to when you want to just let go of stuff and be free and genuine. When I haven’t been there for a while, I pick up a red rock I have at home and just meditate on it. I get the feeling back in no time. I’m not a New Age type person, at least, I’m too logic-minded to get all “woo woo” (what we like to call people knee deep in mysticism and New Age philosophy) but I’m also practical enough to recognize that Sedona harbors something you’ll never come close to finding anywhere else.