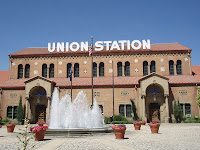 Wow, I can't tell you how hard it is to find haunted spots in the volcanic west. There's certain states like Idaho and the area around it that just simply has almost no hauntings and when they do have them, 80% of the time they're haunted canyons, mountains, streams, cemeteries, and other outdoor features, almost never buildings. This is intriguing to me. I'm finding volcanic areas to be rather incompatible with haunted buildings but more compatible with strange outdoor phenomenon like lights.

I finally found one place that had reports of hauntings in Utah and that sounded promising, the Ogden Union Station. When researching it, though, here's its scoring:

It's missing these features; waterways, death, and good land. Potentially, it might be a future haunting places, but what I'm seeing so far, the land is just not good for it. I think having volcanic land might just knock it down a point eventually when I get the research done and can figure out how much weight each characteristic carries.

Keep watching. Next will be some familiar haunts.