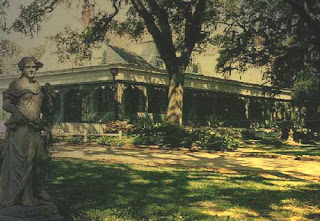 I figured on my list of 50 places I'm researching, I should probably do the Myrtles soon because on Friday night, Zak "Baggypants" and his bro's (or is that dude's? They use both words so often...) from "Ghost Adventures" will be locked down in the Myrtles Plantation for a night of girlie screaming and taunting invisible entities. I've heard a great deal about the Myrtles being one of the top 10 most haunted sites in America and I was always was a bit hesitant to believe it. The Deep South loves its haunts and stories, but upon researching it, there's actually some great reasons for it to be haunted.

1. The land is sedimentary rock.
2. The house is older than 50 years (1794).
3. Lots of death--a slave woman cooked oleander into a cake and the wife and two children of her master passed on. A man was shot on the porch and died there. Countless numbers died of typhoid and other diseases through the generations.
4. It's near a train track.
5. It's near a stream.

So, how do I come up with 6/6? I couldn't give it a point for construction because the house is frame/clapboard. But... the house was built on top of Tunica Indian burial grounds. The man building there simply discarded the bones while clearing for the mansion. This is significant enough to bump it up a point.

If you recalled "Ghost Hunters" episode at The Myrtles, you probably recall the interesting footage where Grant was sitting in a chair in one of the cottages and Jason was lying in bed and the lamp on the table slowly slid across the table top. That was perhaps the most "hard" evidence they got there, but it was interesting. I have to admit finding "Ghost Adventures" a guilty pleasure just to see these three stooges pretending to ghost hunt in great locales. If you just ignore them, you might enjoy the show just for the beautiful setting and moodiness. This will be shown Friday night on Travel Channel.