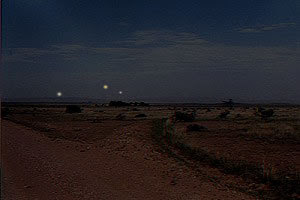 Thanks Devin for this post's topic. Many of you have probably already heard of the Marfa Lights. I’m guessing this because you’re reading a blog about ghost hunting theories and so you’re probably a lot like me and enjoy programs about phenomenon.

Near the town of Marfa, Texas there’s a phenomenon that was first officially reported in the 1950s, but were seen long before then. That being said, if those accounts are accurate, it wasn’t car headlights, and it must be some kind of natural phenomenon.

What’s reported is 1-10 foot diameter lights that are reddish orange in color. They vary in size and can go up to high speeds. Their luminosity apparently changes, as well. Also associated is often times a high pitched tuning fork sound.

It’s regularly witnessed by thousands of people and scientists have even researched it and had theories but none have stuck. I punched in some of my haunted formula, out of curiosity. Since this reminds me of the Devil’s Promenade and Skinwalker Ranch issues, I wondered if it had a commonality.

It is an arid area where water is precious and does supposedly have ties to Native American culture. This source says “The Indians saw the lights long before any white man did. Their legends tell of the Great Spirit, who made the mountains in the area by throwing all the jumbled rocks left over from the creation of the stars, the birds and fishes, and the earth itself, into a huge pile in the middle of the leftover wasteland. The Devil then promptly claimed the rock pile and wasteland and turned it into hell, adding things that bite, sting, or prick. When anyone died in that hell, the lights became the spirits of the dead ones, who were thwarted in real life and forced to wander the desolate world in search of kith and kin. The locals who like this explanation also say that ‘it is a hell of a place that the Devil has for hell.’”

Interestingly, reports say that Marfa sprang into existence as a water stop on the old Southern Pacific Railroad line between San Antonio and El Paso. We’re seeing a commonality, huh? The area does have train tracks and waterways. There are north-south running mountains on totally volcanic ground which I haven’t found as a factor in hauntings, but does seem to be connected to strange natural phenomenon such as this.

If anyone comes across another one of these strange places, let me know. I’d be curious to start adding them to my map and see what commonalities we can find.