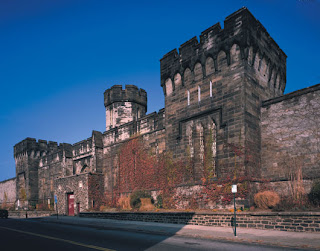 I'm excited to cover this one for two reasons. One reason is that I've always thought of this building as way too commercialized and trampled upon by visitors and tons of ghost tours and Halloween events. Because of the massive attention to it, I always assumed it was somehow making up for an absence of events. The second reason is that I've been sitting on the findings of this one and can't wait to share them.

It's pegged the needle all the way!

Followers of "Ghost Hunters" have no doubt seen the episodes at Eastern Penn. The first time, they were able to capture what appeared to be a figure trying to form on a catwalk, coming towards the camera and then just vanishing away in a split second. That's what made them want to go back. They had many personal experiences, but that one baffled them. Having a bias in the first place about the prison because of its publicity, I interpreted that figure as a guy in jeans with a cape playing a trick on them. Of course, much of it doesn't add up, from the very short height of the thing, to its ability to move so fast! I've seen the footage dozens of times and one thing I know when reviewing film is that the eye will look for patterns and when you get a flash of color or light, you interpret immediately to something known. By focusing on the light portion of the bottom of the figure, I made a quick assumption it was jeans on the bottom, cape on the top. Once you see that, it's hard to NOT see it. It's like EVP's, if you hear someone say "she's over there," that's all you will hear each time you listen to it, making you no longer an objective listener.

So, I thought I'd check out this location to see what elements it has on my tentative haunted formula (it will eventually be changed slightly as I learn more).

Eastern Penn works out like this:
1. Older than 50 years (open from 1829-1971).
2. Made of stone and rock exclusively--that's an enormous fortress--it pegs the scales even more because not only is it only stone and rock, it's also got a center octagon with spoke-like halls coming off of it which makes it essentially the circular structure like a lighthouse, perhaps better able to contain and hold events.
3. It saw a great deal of death/trauma.
4. The land is sandstone and shale.
5. There is water nearby.
6. There is a train track nearby.

No matter how I work it out in my mind, this building HAS to be haunted. The bigger question is, with all the ghost hunting, mocking, Halloween antics, and nervous tours going through there, does this affect the actual proof of haunting? When I go onto my next phase of research to study the hard evidence for hauntings at these sites, we'll be able to compare the "physicality" score and the "hard haunting" score and see how this works out. I have to tell you, I'm excited to get to that part of the research so I can finally see real trends.

There's probably 14 or so left before we go onto the hard haunting review.