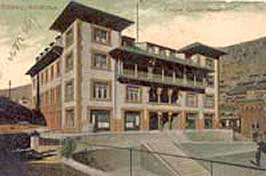 Hey, I couldn't possibly be reporting about haunted sites around the country without hitting this popular one in my own state. The Copper Queen Hotel was opened in 1902. To build it, they had to blast out part of the mountain (good sign for haunting possibilities). If you watch "Ghost Hunters" you might have seen the episode when they stayed at the Copper Queen. There were some anomalous findings, but the really exciting part was when Grant's room camera captured a much talked about phenomenon. In the Julia Lowell Room, reportedly a beautiful woman who killed herself is known to bother the male occupants, whisper in their ear, mess with their feet. Well, the film captured Grant's legs spread as he was sleeping on his back when the comforter and sheet were pushed upward, exposing his feet. This was a movement that was beyond explanation and very thrilling to see.

I have stayed at the Copper Queen and admit that I woke up many times during the night to the sound of little boys rushing down the hall and squealing. It sounded rather muffled and oddly distant, though I felt it was in the hall beside my room. This is a common occurrence at the hotel. There are three supposed ghosts; the woman who killed herself, a boy who drowned in a nearby river, and a man with a cigar.

Here's how this place stacks up:
1. The land is limestone and copper (wow! Copper--super conductor of electricity--hmm??)
2. The building is stone.
3. It is older than 50 years.
4. It has death associated with it.
5. It is near a stream.

The only thing missing is a railroad track, although I understand there were once trams going past it in the early 1900s. I give it a high 5/6 because of the land--this copper mining land is just extraordinary. Anyone who's been to Bisbee can feel something rather edgy about it, and it's not just the eccentric occupants. It got me wondering about mining towns being so highly reported as haunted. Perhaps the minerals/gems/precious metals/ores can somehow work as a better conductor of events such as fighting, stealing, whoring, and cave-in's. It's something to consider.