Can a Cemetery Be Haunted? Bachelor's Grove - Scores 3/6 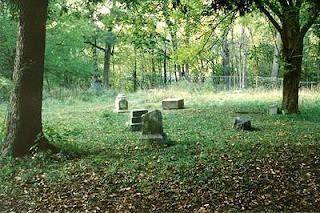 On my list of 50 places to give haunted formula scores to, I came across Bachelor's Grove Cemetery. It's one of those sites you often hear people rattle off when describing haunted cemeteries around the US.

Admittedly, I have an enormous amount of exposure to cemeteries and to visiting them after dark. I have always remained highly skeptical about hauntings in such places, but as land can be equally as haunted as buildings, I try to put aside the mind-logistics involved in whether folks haunt their bodies and try to focus on what I've found. There are some cemeteries that most definitely have activity that is highly unusual, very characteristic of full-body apparitions, shadowpeople, and EVPs. Yes, cemeteries can be haunted. Just which ones are? I'll admit, I haven't found much activity at older ones, but more at newer ones that are often visited. The assumption on my part has always been that grieving visitors call forth energy.

Bachelor's Grove has a few things going for it:

Why didn't I count it for death/trauma? Probably because those buried there certainly didn't die there. Even though it has numerous stone headstones, I can't necessarily give it a score for being a stone structure. Should it have huge stone crypts like the famous St. Louis Cemetery in New Orleans, then it might have enough mass of stone to be considered conducive to a haunting, but for scattered headstones, I just can't give it a point for that.

It will be interesting on my second sweep of research to see just how this scores on actual "hard proof" of haunting that people have gathered. I suspect it will be a 2/6 or somewhere around there. I'm sure it probably has plenty of mood and atmosphere at night (most cemeteries do), but other than the limestone ground, it's pretty common in most respects.