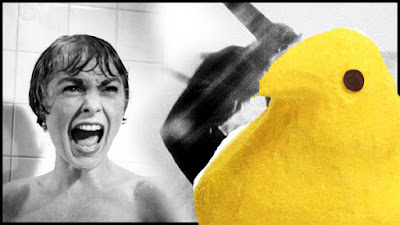 Not that Easter should bring to mind horror films, but for aficionados of the holiday-themed horror movies, here's a list for your Easter viewing -


Holidays (2016) HOLIDAYS is an anthology feature film that puts a uniquely dark and original spin on some of the most iconic and beloved holidays of all time by challenging our folklore, traditions and assumptions.

Easter Bunny, Kill! Kill! (2006) Remington, a murderous grifter cons his way into a mother's heart, putting on a fatherly facade to her cherished son, Nicholas. But the second she leaves for work, a torrent of abuse rains upon the gentle boy. Remington heads out for some hookers and invites his dilettante-child molester-drug-dealer buddy over to abuse Nicholas. In the meantime, the only comfort the boy gets is in confiding with his new pet bunny. Debauchery is at hand but Nicholas is nowhere to be found but someone wearing the mask of the beloved holiday hopper shows up ready to deliver a blood-splattered night of unspeakable carnage.

Easter Sunday (2014) It's been 24 years since the serial killer Douglas Fisher was executed on Easter night. This year, a group partying teenagers not only raise some hell, but literally raise the dead.

Kottentail (2007) The "Overlook Animal Research Laboratory" has long been working on genetic engineering without any trouble. That all changes one night when two would be animal liberators set free a test rabbit, not knowing that the bunny's genes have gone haywire. On the loose, the vicious little beast soon attacks a farmer - Hans Kottentail. Hans quickly begins to change. He grows fur, eats veggies and... hops. It isn't long before murderous a rage overtakes poor Hans and he begins picking off townsfolks at a rapid pace. It's up to 5 local women, each with ties to the case, to bring him down before he kills them all.

Beaster Day: Here Comes Peter Cottonhell (2014) A giant bloodthirsty Easter bunny starts viciously killing the local townsfolk. When the Mayor refuses to act and the attacks grow more gruesome, the town finds its very survival in the hands of a wannabe actress and a crazy dog-catcher.
Easter Casket (2013) All hell breaks loose when Peter Cottontail aka The Easter Bunny hears that the Catholic Church is about to do away with all Easter rituals not pertaining directly to the resurrection of Christ. With Father Asher (A warrior priest) hot on his trail Cottontail starts a rampage leaving the bodies of the clergy (and a few schoolgirls) in his wake. Can Asher stop him before its too late?

Peter Rottentail (2004) A doomed magician makes a deal with dark forces which ends in tragedy. Soon he is back to exact his bloody revenge!

Night of the Lepus  (1972) Giant mutant rabbits terrorize the south-west.

Bunnyman (2011) Society is ruled over by a giant dog that is using the recent surge of monster attacks to try and convince his people to sign up for "optional" brain surgery. A self appointed "monster hunter" in a pink bunny suit is the only person brave enough to stand up to the creatures but soon runs into trouble when his girlfriend is kidnapped by the Macaroni Gang. He goes on a warpath through the seedy underworld of The Dog's dystopian society while trying to fight hallucinations brought on talking worms living inside his large intestine. Dogshit blends live action and animation together to create a psychedelic nightmare world of doom and despair, and other awesome keywords.