Slab City: Town With No Laws 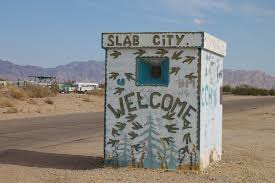 An abandoned base in the California desert became an off-grid, lawless, and interesting squatting site. It sits 156 miles northeast of San Diego. Some of the residents come like snowbirds for the gentle winters, coming in campers. Others stay all year. Solar panels and generators abound.


In 1942, the area was Camp Dunlap. By 1956, it was no longer needed and closed down. Over time, people have come and camped out there, calling it a lawless area, but those who live there do so by considerate means, caring for neighbors in the harsh location.

The self-professed city is set up with two main areas, Salvation Mountain and East Jesus.

Leonard Knight was the genius behind the building of Salvation Mountain, taking two decades to construct and paint it thoroughly. 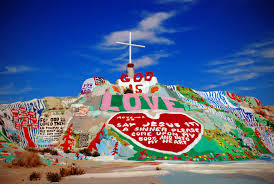 As if the place isn't interesting enough, its history was quite odd. Once the military removed the buildings and left the slabs, men were hired to harvest creosote so they set up trailers there. Since that time, more and more came and added on to create this little getaway city. 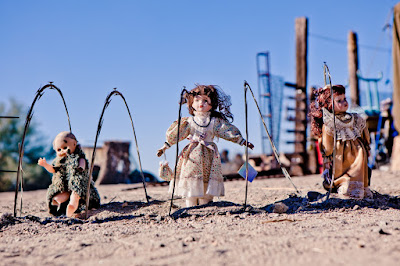 East Jesus is the central living area and also ongoing art installation. The citizens are quite creative and their work is often quite moving. 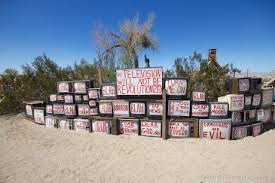 Some might call it a cult of hippies or a compound, but it's more like a place to lose the world and find oneself. 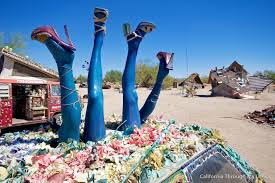 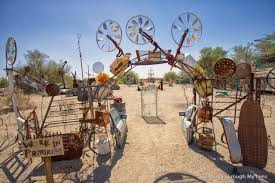 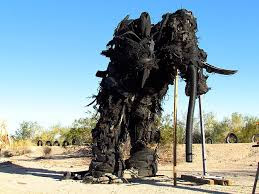 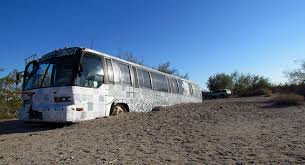 For the relaxing pleasure of the residents there is yet one more section called "The Range" where they have lights and music for dancing. 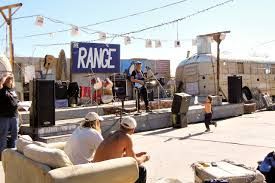 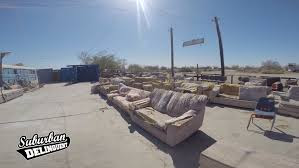 Studying an area such as this makes one thing about how Europeans moved out across America and started little towns that drew the attention of certain types, whether they were miners or farmers, shop owners, or blacksmiths. Eventually, those little settlements became official towns, but first the citizens needed to be seeking the same agenda for their new home. It will be interesting to see if The Slab is here a decade from now or if the resources are tapped enough that the mobile city could move on to a location with more resources.

For now, it's just a thing of beauty and amazement and filled with some very strong independent citizens.