The Dog-Faced Tribes of Russia 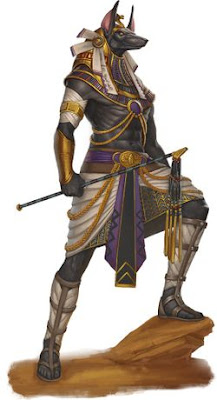 There are legends of tribes of people with dog-shaped heads. Cyanocephaly sounds quite extraordinary, but the frame of reference for people with unusual-shaped skulls that create a snout-like situation would be explained by most as "dog-faced."

Could such tribes have existed? Well in the the travels of Medieval adventurers like Giovanni da Pian del Carpine, Ogedei Khan and Marco Polo, they spoke of running to such tribes in Russian territory.

Giovanni mentioned the armies of Ogedei Khan who ran into the dog-headed barbaric people in the area of Lake Baikal. Marco Polo spoke of finding them in Andaman Islands.

Ancient Greeks and Ancient Egyptians spoke of dog-headed people in their legends.

Greek explorer, Megasthenes, claimed there were dog-headed people in India who lived in the mountains and barked, lived in animal skins, and lived like wild things.

St. Andrew and St. Bartholomew described, "city of cannibals... whose face was like unto that of a dog."

Augustine of Hippo spoke of them being descendants of Adam.

In Eastern Orthodox practice, they identify St. Christopher with the head of a dog.

Source: The German bishop and poet Walter of Speyer portrayed St. Christopher as a giant of a cynocephalic species in the land of the Chananeans (the "canines" of Canaan in the New Testament) who ate human flesh and barked.

St. Christopher was killed in the third century who legend says carried the Christ child from the river and later became the Patron Saint of Travelers. This gets more interesting as we add this tidbit -

Source:  According to the legendary account of his life Christopher was initially called Reprobus. He was a Canaanite, 5 cubits (7.5 feet or 2.3 m) tall and with a fearsome face.

In fact, a great deal of Medieval texts carry the theme of there being such dog-headed people who could be gentle if treated gently and turn ruthless and grotesquely angry if incited.

Where do these legends from pre-biblical times, the Bible, and even into the Medieval Ages originate from?

Well, if we look at Russia, the cave known for the discovery in the early 2000s of another form of man that lived along side us, the Denisovans, was in the Altai Mountains in Siberia. The very same area that supposed tribes of dog-headed people were found.

What do we know of Denisovans? Not too much except that they had unusual large molars which would show they had very powerful jaws, they could be found in Siberia and have a gene that makes the able to tolerate high altitudes, such as those found in the Altai Mountains. 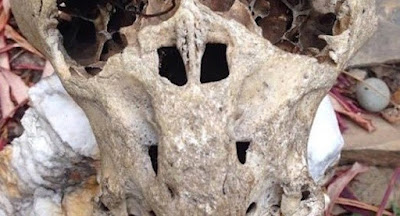 This odd skull, above, was found in the Russian Mountains. This case gets more interesting. It was supposedly coveted by the SS during WWII and, no wonder. If they liked to collect things of magical or odd powers, there is nothing quite so unusual as a skull such as this one (SOURCE).

Described as unusually tall, dog-headed, fierce, even cannibalistic, we now have a description that could fit repeated legends from Native people, cultures in the East and the Bible. When you get repeated themes, you have to wonder, what did they know?

We can add to this wonder by asking ourselves, where did the "giants" of old come from, those skeletons dug up around the world? Was the tall element something bred into Neanderthal and Homo sapiens from these Denisovans who were dog-headed?

From the book The Natural and Aboriginal History of Tennessee by John Haywood (starting page 200 on reprint edition from Amazon):

Referred to as "pygmies," these skeletons were found buried in crypts just outside of Sparta, Tennessee in the County of White and reported in the Nashville Whig in June 1820.

These graves had many bodies, all of them quite small. Some of the crypts were as small as 18 inches by 12 inches. The first grave was 2 feet long and inside the small skeleton and its teeth had the researcher wondering if it was canine or monkey. He had them sent off to be examined.

There was great dissimilarity in skull shapes, the size and shape of the bones, and looked to belong to different tribes of people. Just 8 miles away, a 7-foot giant was found.

It would seem that there were in legends and in finds, people with unusual skull shapes that created the birth of many characters, stories and encounters by explorers to explain something that was encountered and not understood. We make a lot of assumptions we have covered all the kinds of men that have been upon the earth, but it was only years ago we found the Denisovans and we also found their DNA within our people in places like the Himalayas and the South Pacific/aborigines/Polynesians.

Today, stories of human-like beings with dog heads and hair covering their bodies are reported in America and popularly referred to as "dogman."

We have a great deal to learn about our world, but repeated legends around the earth of dog-headed people, giants and floods, need to be given proper serious study, as it appears that man has tried to remember his history and pass it on to us in the future.