It Happens In the Bedroom: Why Ghosts Visit You There 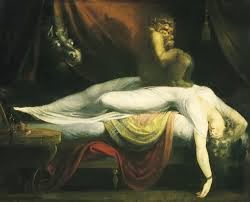 Repeatedly when called to someone's home who is having issues with haunting-like events, we are taken to the bedroom, the site of some extraordinary encounters. It's simple to check EMF readings off the alarm clock or C-PAP machine, but once there seems to be no reason to be having explainable discomfort in the room, we are left with the murky water that is sleep-encounters.

It's easy to toss out these experiences and call them "sleep-related," but look a little closer at what happens at sleep time that might make us the ideal target for connection.

There are many factors at work in a haunted location and every one of them depend on the minds and chemistry of the people who dwell there. Changes in emotional milieu, occupants, medications, and other more subtle nuances are at play with those human beings, actually changing the haunting qualities and intensity. We are an integral part of activity in a home.

Now, you put a person into a bedroom where hormones released make them sleep, make their bodies paralyze, make them go into dream state and alpha state as they go in and out of falling asleep and waking, and you have a whole chemistry, emotional, and even psychic smorgasbord.

Some of our biggest fights as couples are in bedrooms and some of our most passionate moments, as well. At the end of a trying day, we retreat to the bedroom, sometimes for a good cry when we are mourning and don't want family members to witness it. And, as we lie in bed preparing for sleep, our minds cycle through the day and the anticipation of the next day. As anxiety is released, we finally give in to the brain's release of melatonin and grow weary, sinking into the mattress like a lead weight as we enter alpha state in a room that is about as potent a human emotional marker as any other room in the house.

And, in the cycles of sleep state, many things can interrupt to the point that they incorporate into our dreams, like a stomachache becomes being shot in the belly in a dream, or a loud noise outside becomes thunder in our minds, and at times our body paralyzes during dream state and we begin to awaken, only to see things that aren't there, and be unable to move, a horror to be sure!

You take the average person who perhaps isn't tapped into their psychic skills and you lay them down on a bed and you let them drift into that floating suspended moment before sleep and they are now receptive to perceiving and having encounters that in their logic-minded daily life they may not ever experience.

Visitations:  Visitations from newly deceased loved ones is the most common encounter by the "regular person not in a haunted home and not typically the type to encounter hauntings." The visitation of the recent missing loved one is usually a window of up to a couple weeks, but most often within the first few days of the person's passing. It would appear that the "soul" of a person breaks that umbilical over time and moves on to the next task in the life cycle, but there are exceptions in which a surviving person is undergoing a horrendous stress and turmoil, life risk, or even the birth of a child in the family line, when the passed relative can make another showing.

Some counselors would say that dreaming of the dead relative is a normal part of assimilating a new reality and this does happen. Usually if I dream about the person who passed, it involves me knowing they are sick or supposed to be dead and them not knowing it. That is a dream. Visitation is different all together.

A visitation almost always includes visually seeing the person in your room. You are awakening, falling asleep, or wake up during the night and - boom - they are standing there. Sometimes there is a brief message and a disappearance or a thought transference before they leave. Consider yourself very blessed to do this. I believe there is an emotional and soul-based umbilical that ties us to people we love, the same way we sense someone we love is in trouble. We lose that physically based connection over time upon death, but for a time, they are still able to tap that "highway" to you by that once active connection.

Ways to encourage a visitation are pretty straightforward. Before you go to sleep, turn off all distractions, sit down with a photo album and sort through pictures and memories. Lay the book out next to you open to a page with the person's photo. Lie down and replay some old scenes in the past with your loved one and say "(name) please visit me tonight. I need to see you one more time." Now, go about falling asleep normally, knowing that they will be there some time during the night - this is important because it's like when you know you have to get up at 6:30 the next morning to catch a flight, you get up at 6:28 before the alarm. You will be prepared for and expecting an interruption during the night. This doesn't always work, but do it nightly for at least a week following the passing.

Physical annoyances:  Another interaction people report with spirits is them "messing" with them as they sleep, pulling on the bedsheets, sitting down, stroking their hair, and the like.  You have two things happening here; one is that you are resting and have no other stimulation, so you notice it more easily than you notice it in the daytime and two, you are nonthreatening and in an unconscious or semiconscious state. This can be attention-getting and it can simply be a desire to interact without scaring you.

Sex:  Our dreams go through cycles through the night. Usually the first dream cycle lets of anxiety, fear, and anger. Then, we begin to do problem solving. Then, eventually we get to the pleasant dreams that are usually arousing in the morning time. It is not unusual to have hormonal arousals in sleep and wake up while climaxing, even for females!  Incorporating these sensations into dreams is perfectly normal, just like if you have a headache in your sleep and you dream about having your head in vice. No, ghosts do not want to have sex with you. What would be the purpose for a body-less person who is not being pumped with instinctive hormones to desire sex?  Our bodies, however, have circadian rhythms and hormone release and that happens to include a very early morning cycling of arousal.

The Mind-Driven Phenomena:  In our sleep time we also can encounter many things outside of the daytime rational and alert mind and its familiar realm. We might have premonition dreams, out of body astral projections, vivid dreams induced by geomagnetic storms, sleep paralysis, night terrors, alien encounters, and any other number of "other realm" encounters that we cannot normally enter until we put the mortal body out and allow the spirit to wander.


Ultimately, the very emotional content of a bedroom, the mind's sleep cycles and receptive state, make the bedroom the ideal time for contact. The only other place in the house second likely to have activity is the TV room, as watching TV can induce alpha-like brain waves.

More things you might not have known about haunted home tendencies?

Least likely room in a house to be a haunted? The kitchen or home office. Two rooms utilized with task-oriented mindset in place and well lit.  I have almost never run into issues with these two rooms with the exception of someone thinking something in the kitchen fell down or got knocked over, but given the amount of teetering items in a kitchen, no wonder.

Most likely to be haunted? TV room and bedrooms where minds are in neutral and you can be distracted.  It's not that they are more haunted necessarily, only that the mind of the people in those rooms is more likely to notice it.  You are also more likely to see shadow people in these two rooms for much the same reasons - out of the corner of your eye when you're relaxed.

Most likely to have apparitions? Hallways where something going past an open doorway can be seen blocking out light or being framed by incoming light from bedroom windows.


There is no need to feel vulnerable to nighttime visitors. In fact, there are lots of times people are awakened by helpful spirits when a house is on fire, a child is choking and in danger in another room, or one is having nightmares or sleep apnea. Your dream state is much more imaginative, terrifying, stressful, and active than any spirit interaction that might occur at bedtime.

It's possible you have been visited, and equally possible that in our dreams, we haunt others....