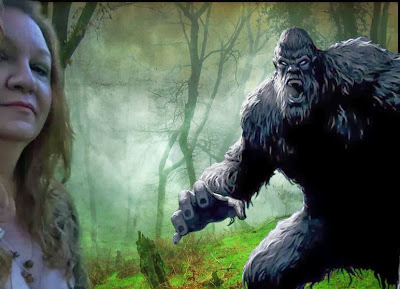 There's a lot of theories going on of extraordinary explanation for Bigfoot. The main reason for this is the difficulty we have in procuring physical evidence of them. For such large giants to be living among us, we should be bumping into them a lot more, but they barely leave tracks or hairs, and at some point they would need to sleep, right? And why aren't they raiding our trash cans and stealing meat from our smokers? It would seem that anything that can be this elusive, sure seems to have very few moments of vulnerability, like dying, giving birth or being sick.

When something is seen enough to know it's there and leaves traces, but isn't stumbled upon in its bedroom sleeping or gathering berries along the roadside, one does have to go to extraordinary explanations.

I'm open-minded. I never say "never," but I wasn't a big advocate of "woo-woo" explanations for Bigfoot and perhaps the main reason is this - we know he's a biological creature, we know that he looks much like us, and there is no reason for a spaceship to drop him off to wander our woods and then leave unless, of course, the Earth is a giant roadside rest stop for alien pets who need to be walked from time to time.

I live in the desert and have heard of javelinas (wild boars) but over 30 years of hiking around and poking around the desert - never saw one until just recently, about 34 years after moving here, and in a residential neighborhood.  There are big populations of them. In fact, neighbors complained of them eating their plants and scaring their kids and I felt like saying, "bah! They don't exist!"

I'm logical by nature, so I have to ask - why would another planet or even another dimension send in the Big Fellas just to have them hide and try not to be seen? They certainly aren't gathering info about us, or they'd be hiding in city alleyways and watching us come and go from restaurants and strip joints.

Let's suppose there is some kind of portal or doorway between worlds - what might the opening and closing of that be like? Would it leave tell-tale signs? Some say it does, between odd and and often reported unexplainable metallic sounds in the wilds to flashes of light and glowing spook lights. It would say something about his world that they too are wearing 3-dimensional bodies that have the same biological drives. So, are any humans running in and out of these portals? Do they take any humans back with them? If they carry no technology and live rather primitively, where are they hiding their "garage door" opener between the worlds?

What of reports of UFO sightings and Bigfoot correlating? I can also correlate UFOs showing up with nighttime, but that doesn't mean that the two are tied together. UFOs also occur within, ah, 25 miles of a Starbucks, but not particularly connected. It's natural to want to find out, "why is Bigfoot here in this area?" And, then begins the search for what unexplained occurrences have happened. If a UFO went to the risk of being seen and then dropping off hairy occupants to wander our woods and remain hidden, it doesn't seem to jive. Bigfoot does not seem to have a directive or purpose and the aliens don't seem to have a reason to carry big tall hairy humanoids on-board and risk hiding them on earth to stay hidden and accomplish nothing.

There has been some evidence I've come across that makes me wonder about either unusual abilities or otherworldly origins and I never ever thought I'd consider it, but it is indeed hard to explain something I have seen with my own eyes, but can manage to elude us so very confidently, that seems to have an edge against us, and can live in places that don't seem to support the caloric needs we would expect, that can walk barefoot in the winter without shoes and its toes aren't frost bitten, and doesn't seem to keep homes, tools, or things squirreled away that we run into very often.

Perhaps we believe Bigfoot is otherworldly because we are the stalker and yet we cannot capture the prey? What could possibly outsmart a human?

Perhaps a human of a whole different level of competence.